SORONG (West Papua) • A club-and-machete wielding mob in Indonesia butchered nearly 300 crocodiles in an act of revenge after a local man was killed by one of the reptiles, the authorities said.

Images from the scene showed dozens of dead crocodiles, covered in blood, lying on top of each other after the attack at a breeding farm in West Papua province.

The incident happened last Saturday following the funeral of the 48-year-old man who was killed after he entered an enclosure while looking for grass to feed his livestock, police and conservation officials said yesterday.

"One of the crocodile farm employees... heard someone screaming for help and ran to the scene where they saw a person being mauled by a crocodile," said Mr Basar Manullang, head of Indonesia's Natural Resources Conservation Agency in West Papua.

The man's family and "hundreds" of other locals, angry over the farm's location near a residential area, marched to the police station where they were told the breeder would pay compensation.

But the mob was not satisfied and headed to the crocodile farm armed with clubs, knives, machetes and shovels which they used to slaughter 292 crocs, ranging from palm-sized babies to 2m-long adults, the authorities said. 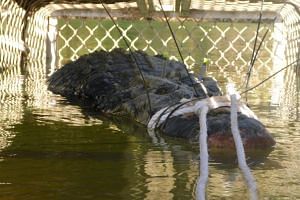 Rejected by zoo, crocodile ends up on cooking pans in Indonesia

Outnumbered police and conservation officials said they were unable to stop the grisly attack.

Criminal charges may be laid, they said.

"For now we are still questioning the witnesses," said district police chief Dewa Made Sidan Sutrahna.

The bloody incident highlighted the dangers of trespassing into a breeding farm and also raised concerns about its safety.

"They have to make sure that the farm has good barriers and they need to step up security with CCTV and security signs to warn people" of the dangers, said Mr Dwi Nugroho Adhiasto, programme manager at the World Conservation Society's Indonesia office.

The South-east Asian archipelago is home to a vast array of wildlife, including several species of crocodile that regularly attack and kill humans.

In March, the authorities in Borneo shot and killed a 6m-long crocodile after it ate a palm plantation worker.