The presence of militants from an Indonesian terror group among Maute combatants fighting in Marawi City reinforces the appeal of the southern Philippines to extremists in the region who are loyal to the Islamic State in Iraq and Syria (ISIS).

That the Jemaah Ansharut Daulah (JAD) sent no fewer than 40 fighters from Indonesia to Mindanao, despite its own struggle back home, shows that it too believes victory over Philippine security forces will further its broader mission in South-east Asia, said analysts.

ISIS, to which both the JAD and Maute group have pledged their allegiance, wants to expand and create its next wilayah, or state, in the region even as it loses territory in the Middle East.

"For Indonesian militants, and in the context of South-east Asia, southern Philippines is the most ideal for that purpose," said Mr Taufik Andrie, executive director of the Institute for International Peace Building think-tank last Friday.

Yesterday, the Philippine military observed a day of silence and prayer to honour 13 Marines killed in action last Friday. It was the biggest single-day loss for troops trying to retake Marawi from the Maute militants.

As clashes in Marawi head into their third week, regional security agencies have picked up intelligence that foreign fighters from places like Chechnya, Morocco and Saudi Arabia are among the Maute.

The actual size of the Maute's fighting force in Marawi is unclear, with estimates so far ranging from a few hundred to over a thousand.

ISIS, to which both the JAD and Maute group have pledged their allegiance, wants to expand and create its next wilayah, or state, in the region even as it loses territory in the Middle East. 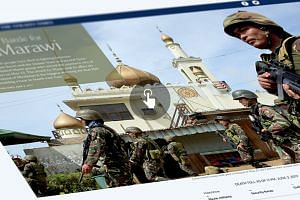 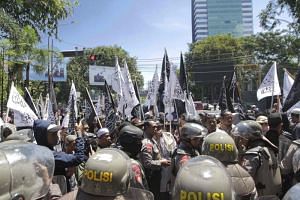 'Militant moderates' out in force to crush intolerance

But the largest groups of foreign fighters by far seem to be from Indonesia and Malaysia, which share sea borders with the Philippines.

The Malay Mail, citing a Manila- based intelligence official, reported last week that 28 Malaysians have joined the conflict.

But what raised alarm was Indonesia's National Counter-terrorism Agency chief Suhardi Alius' confirmation last Thursday that 40 Indonesians fighting in Marawi are followers of the JAD.

The group is led by Aman Abdurrahman, a jailed ideologue who ordered his followers to mount a suicide attack in Jakarta in January last year. It was also linked to several other attacks in Indonesia, including twin suicide bombings in East Jakarta on May 23, which killed three policemen.

An offshoot of the Jemaah Islamiah (JI) terror network behind the 2002 Bali bombings, the JAD is known for mounting deadly attacks, especially on the Indonesian police.

In January, the JAD was placed on a United States counter-terrorism watchlist because of its ties to ISIS.

Experts say its violent streak is matched by the Maute group, which was formed and named after Moro militant brothers Abdullah and Omarkhayam Maute.

Mr Joseph Franco, a research fellow at the Singapore-based Centre of Excellence for National Security, said the brothers pledged their allegiance to ISIS two years ago "to project a fiercer image".

Their relentless guerilla war across Mindanao island attracted the attention of Abu Sayyaf leader Isnilon Hapilon, who knew that merging with the Maute group would lead to greater fighting capability and territorial control, he added.

The JAD may be looking to make a similar impact by joining the Maute in its battles in Marawi, noted other counter-terrorism watchers. Mr Taufik said this also aligns with an ISIS edict in 2015 telling followers who cannot travel and join its struggle in the Middle East to either bear arms in the nearest conflict where its loyalists are at war, or strike at home.

The Australian newspaper on Saturday quoted an Indonesian who trained at a militant camp in Mindanao some years ago as saying that "the Marawi siege has reinvigorated Indonesian jihadists".

According to Iqbal Hussaini, who was jailed for smuggling weapons from the southern Philippines to JI terrorists in Indonesia, many of his countrymen now want to join the Maute group.

"Many are looking for the next jihad," he added. "The likelihood that Marawi will become a base for ISIS is very, very high."

There are also fears in Indonesia and Malaysia that citizens who fought in Marawi may return, battle-hardened with combat experience, to orchestrate attacks.

The Riau Islands police said last Friday that it was beefing up security at ports and other sea entry points to prevent incursions by militants, including those from Indonesia, being flushed out from Marawi.

This followed the Indonesian military's move last week to increase its troops and surveillance operations in areas bordering the southern Philippines, such as Kalimantan, North Maluku and Sulawesi.