The authorities in Indonesia have, for the first time, prosecuted a terrorist group as an entity, coinciding with efforts to secure the country ahead of the Asian Games, which it is hosting next month, and the International Monetary Fund-World Bank meetings in Bali in October.

State prosecutors yesterday charged the Jemaah Ansharut Daulah (JAD) with being an organisation responsible for widespread terrorism, the loss of lives and the destruction of property from 2016.

Success in court would allow the authorities to cripple the JAD by choking off its funding.

In the dock at the South Jakarta District Court yesterday was Zainal Anshori, the head of JAD operations in East Java, who last year was jailed for seven years over a botched gun-running operation from the Philippines.

The South Jakarta Police deployed more than 180 police officers to secure the hearing as Zainal was led into the courtroom.

The 44-year-old is believed to be the ranking JAD member in custody after its spiritual leader, Aman Abdurrahman, who was sentenced to death last month for his role in the first ISIS-inspired strike in Indonesia on Jan 14, 2016, when four militants mounted a suicide attack in downtown Jakarta.

Zainal did not enter a plea during the hearing in which four witnesses testified.

Prosecutors are expected to submit their sentencing recommendation for Zainal at the next hearing tomorrow.

A copy of the indictment, seen by The Straits Times, showed Zainal at the top of a complex JAD hierarchy and network of more than 20 militant leaders - referred to as "emirs" in the papers - from across the country.

The different "emirs" helmed JAD terrorist cells in smaller districts and towns in East Java - singled out because Zainal was the provincial JAD chief - as well as others who head larger groups in Java, Sumatra, Kalimantan, Sulawesi and Maluku.

Many of those mentioned in the court papers are familiar names such as Abu Gar, a JAD leader from Ambon, the provincial capital of Maluku, who allegedly recruited the four militants for the attack in downtown Jakarta in 2016.

Another is Abu Umar, the head of the JAD cell in Blitar, East Java, which was connected to the triple church bombings in the provincial capital Surabaya, in May.

Court papers also identified the different roles of some of the senior militant leaders, which are akin to those found in a corporate entity.

They included, among others, the posts of secretary, treasurer as well as heads for media, Islamic and community affairs.

The court action against the JAD as a collective body is a significant step towards disbanding what is one of most dangerous terrorist groups in Indonesia's history, Jakarta-based radicalism expert Adhe Bhakti said yesterday.

About 10 years ago, similar charges were laid against the now-defunct Jemaah Islamiah (JI), which was behind the 2000 Christmas Eve attacks and the 2002 Bali bombings.

Those charges, however, were not tendered directly against the group, but were levelled as additional charges against JI commanders Abu Dujana and Zarkasih instead.

Both men were found guilty of conspiracy to commit terrorist attacks, harbouring fugitives and stockpiling illegal arms, and sentenced to 15 years' jail in 2008.

Attacks by JAD militants have escalated recently, with one of the deadliest being the coordinated suicide bombings of three churches and the local police station in Surabaya in May, which killed 14 people. 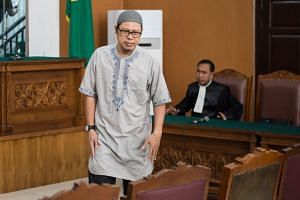 In January last year, the group was also placed on a counter-terrorism watch list by the United States because of its ties to the Islamic State in Iraq and Syria (ISIS) group.

Mr Adhe told The Straits Times a guilty verdict against the JAD would pave the way for the authorities to freeze assets tied to its members.

"This needs to be done because with money, they can procure explosives or weapons and ammunition, and even send operatives to Syria, the Philippines, or other conflict areas," he said .