KUALA LUMPUR - The Organisation of Islamic Cooperation (OIC) members must object in a united voice to any suggestion by the United States to recognise Jerusalem as Israel’s capital, Malaysia’s deputy prime minister Ahmad Zahid Hamidi said on Wednesday (Dec 6).

According to the New Straits Times, Datuk Seri Ahmad Zahid said OIC members should react swiftly to any such plan as it could escalate to a major crisis in the Middle East region.

“We are very concerned with this development and I wish for the OIC members to speak up in one voice to object any move by the United States to recognise Jerusalem as Israel’s capital.

“The OIC nations should view it as beyond a Palestinian matter as it is an international issue,” Dr Ahmad Zahid said.

He said this after receiving a courtesy call from a Hamas delegation led by its political bureau member, Dr Maher Salah in Kuala Lumpur.  Hamas is the Palestinian Islamist movement which controls the Gaza Strip and opposes Israel’s occupation of the West Bank. 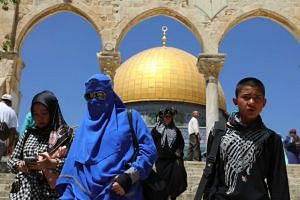 Dr Ahmad Zahid added that Malaysia will come up with several suggestions and an action plan in handling the issue, reported the NST.

“The suggestion will not interfere in the internal affairs of any country including the superpower nations but we hope it would lead to the resolution of the issue and avoid potential conflicts,” he said.

Indonesia’s top diplomat joined a similar chorus of world leaders urging US President Donald Trump not to declare Jerusalem the capital of Israel, as the move may endanger the ongoing Middle East peace process, reported the Jakarta Post.

Speaking at the opening of a seminar in support of Palestine, Indonesia’s foreign minister Retno Marsudi said she spoke with US Ambassador to Indonesia Joseph Donovan on Monday (Dec 4) to persuade the White House against recognising Jerusalem as the capital.

The status of Jerusalem is a key issue in the Israeli-Palestinian conflict, with both Israelis and Palestinians claiming the city as their capital.

“I also mentioned (to Donovan) that the leadership and wisdom of the US are needed on the Palestine issue,” said Ms Retno, as quoted by the Jakarta Post.

Palestine’s ambassador-designate to Indonesia, Zuhair al Shun, urged immediate action to prevent Mr Trump from radically changing the US position “before it is too late”.

“The president has been clear on this issue from the get-go: It’s not a matter of if, it’s a matter of when,” White House spokesman Hogan Gidley was quoted by Reuters as saying on Monday (Dec 4).

The international community does not recognise Israeli sovereignty over the entire city, home to sites holy to the Muslim, Jewish and Christian religions.

Palestinian President Mahmoud Abbas, Jordan's King Abdullah, Egyptian President Abdel Fattah al-Sisi and Saudi Arabia's King Salman joined a mounting chorus of voices warning that unilateral US steps on Jerusalem would derail a fledgling US-led peace effort and unleash turmoil in the region after they received phone calls from Trump on Tuesday (Dec 5) informing them that he intends to move the US embassy in Israel to Jerusalem.

French President Emmanuel Macron also warned Trump that Jerusalem's status must be decided "within the framework of negotiations between Israelis and Palestinians."

Turkish Deputy Prime Minister Bekir Bozdag also said: "If the status of Jerusalem is changed and another step is taken...that would be a major catastrophe ... It would completely destroy the fragile peace process in the region and lead to new conflicts, new disputes and new unrest."

On Monday, permanent representatives of the Organization for Islamic Cooperation's (OIC) member states held a meeting in Jeddah, Saudi Arabia.

The OIC issued a final communiqué calling upon all states to abide by the "resolution of international legality" on the city of Al-Quds - another name for Jerusalem - which is an integral part of the Palestinian territory occupied in 1967, Minister Retno remarked.

Indonesia is a strong supporter of the two-state solution for the Middle East conflict, which envisages an independent Palestinian state with East Jerusalem as its capital living side-by-side with Israel.