A string of false stories have been circulating online since the Lion Air plane plunged into the sea off Jakarta on Monday with 189 people on board.

Dr Sutopo, who has made a name for himself as a straight-talker, highlighted a number of pictures and videos that are making the rounds.

They included Facebook postings showing a photograph of a baby in a life jacket purportedly rescued from the plane's wreckage.

One of the posts - which was shared nearly 5,000 times in the first 24 hours - gave fictional details about the apparent rescue.

"There are many social media posts that claim to show an image of a baby who survived the flight JT610 plane crash," he said.

"This photo in fact shows a baby who was rescued from (a boat) that sank... on Tuesday, July 3, 2018. So this information is a hoax. Please don't spread hoaxes."

Search and rescue agency officials have all but ruled out finding any survivors from Monday's disaster.

Indonesia has a longstanding problem with Internet hoaxes, and fake news is never far behind after a disaster. 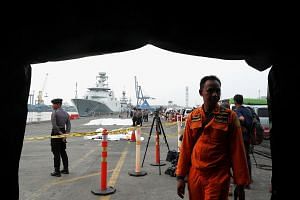 In the days after a tsunami swamped the coastal city of Palu in late September, numerous false stories began circulating, prompting police to make a number of arrests.

Hoaxes were also rampant during a quake disaster on the island of Lombok in the summer.

Dr Sutopo warned this week against other pieces of fake news, including images of passengers with air masks on and a video of people screaming, both falsely claiming to show the final few minutes before the crash.

Dr Sutopo said they were in fact taken on different flights "some time ago" during turbulence and all passengers survived.

A video on YouTube that claims to show the jet crashing into the water was actually of a hijacked Ethiopian Airline that crash-landed in the Indian Ocean in 1996, he said.

A misleading image of plane debris found by rescuers dates back to a Lion Air accident in 2013, near the runway of a Bali Airport, he said.