Special agency will be set up to manage the country's blaze-prone peatlands: Minister

Indonesia's Minister for the Environment and Forestry said yesterday there would be a major transformation in the way the country fights fires, and that a presidential decree creating a special agency managing the nation's fire-prone peatlands would be finalised in the next two weeks.

Speaking on the sidelines of United Nations-led climate talks in Paris, Ms Siti Nurbaya Bakar also said investigations into who caused this year's fires that burned more than two million hectares were continuing but did not elaborate on whether the government would formally release the names of companies, directors and others implicated.

"There are going to be big steps from the government of Indonesia, a big transformation to control these fires through peatland management. I could say even a new paradigm with measures on prevention, and also the recovery, rehabilitation and control of peatlands," she said during a media briefing.

This year's fires affected millions of people and cost the Indonesian economy billions of dollars in lost business and health costs, with total losses estimated at up to $47 billion. They were also the second worst in terms of greenhouse emissions, and helped make Indonesia the third-largest emitter after the United States and China. 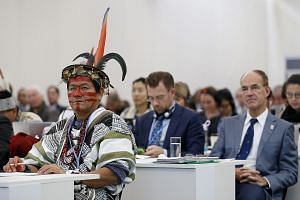 Large areas of Indonesia's fragile peatlands have been cleared and drained for agriculture, priming them for annual fires. Once set alight, dried-out deep peatlands can burn for weeks. Nearly 900,000ha of peatlands went up in smoke this year, Ms Siti said.

While the fires have died out with the wet season, there is concern they will flare up again by February or March, with the current El Nino weather pattern set to last well into next year. El Nino typically causes drought in Indonesia and greatly increases fire risks.

Ms Siti said the new agency would be directly controlled by the president. It would direct management and blocking of peatland drainage canals that criss-cross millions of hectares, as well as rewetting, or flooding, large areas of dried-out peatlands. She said the target area for peatland management was two million hectares.

Ms Siti pointed to peat rewetting and canal blocking programmes being trialled in Sumatra and West Kalimantan, and said these had led to a sharp drop in hot spots locally.

She told The Straits Times that pulp and paper and palm oil firms would be affected by the new peatland management rules, some of which have already been released in recent weeks. She said companies would not be able to expand on peatlands within their concessions. Issues around compensation were still being decided.

She also said burnt plantations on peatlands could not be replanted with oil palms or acacias for pulp wood. The areas had to be restored under the new rules. But who pays for this would be decided later.