Indonesia is ramping up efforts to better prepare for natural disasters, starting with schoolchildren.

Last year was the country's deadliest year in more than a decade. Calamities like tsunamis, earthquakes and volcanic eruptions claimed more than 4,500 lives and displaced hundreds of thousands of people.

"Given the potential for disasters in the country, it's time to have disaster education as part of the national curriculum," said President Joko Widodo late last month following the tsunami triggered by the sudden eruption of the Anak Krakatau volcano. The killer wave claimed more than 400 lives.

Mr Joko's administration believes that training children in disaster preparedness in schools will raise their awareness and equip them with the skills to survive disasters.

At least 37,000 schools nationwide are located in disaster-vulnerable regions, according to figures from the National Disaster Management Agency and the Ministry of Education and Culture.

Meanwhile nearly half a million children were affected last year after more than 24,000 schools were destroyed by earthquakes that shook Lombok and Central Sulawesi, according to the National Secretariat of the Disaster Resilience Education Unit.

"As a disaster-prone country located in the Ring of Fire, we must be ready to respond to and accept the responsibility for any disaster. I've requested disaster education to be conducted better, consistently and early, integrated in our education system," Mr Joko reiterated in a Cabinet meeting last Monday.

The government has said it will double its disaster mitigation budget to 15 trillion rupiah (S$1.4 billion) this year and also revive the defunct countrywide early tsunami warning system. Part of these funds will be used for disaster education in schools.

Dr Eko Yulianto, head of the Geo-technology Research Centre at the Indonesian Institute of Sciences, said disaster education must focus on forming attitudes derived from direct experience through drills and practices rather than on learning from textbooks. "By experience, students will nurture consciousness that they have a responsibility to protect and save themselves.," he said.

He said this can be imparted during geography or sports lessons or through extracurricular activities. Also useful are simple activities such as teaching children how to strengthen class tables with tools or getting them to practise hiding under them during earthquake simulations. These lessons will have a lasting effect on children, he added, stressing the need for continuity and consistency in doing the drills.

As a disaster-prone country located in the Ring of Fire, we must be ready to respond to and accept the responsibility for any disaster. I've requested disaster education to be conducted better, consistently and early, integrated in our education system.

Dr Mizan Bisri, a researcher on the Japan Society for the Promotion of Science-United Nations University programme, believes the introduction of disaster education will have a big impact if it is extended to all schools.

"We need to find what kind and format of drills are feasible," said Dr Mizan, who researches humanitarian studies and disaster governance education. He noted that such a programme must be affordable and teach basic skills like being alert to disaster risks and evacuation to a safer place when disaster strikes.

The schools can start with disaster drills and evacuation exercises but these should be designed for the natural disaster risks of the specific areas, he added.

Since the Dec 26, 2004, tsunami disaster that devastated Aceh province, Indonesia has made efforts to integrate disaster education in the school curriculum.

With the help of non-governmental organisations, the country has set up 25,000 disaster-safe schools. 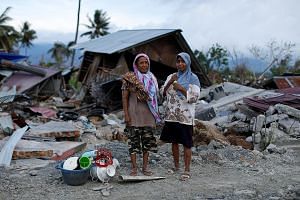 Indonesia's deadliest year in more than a decade

However, Dr Mizan noted budget constraints mean that many schools are left out. Still, he believes that routine drills and evacuation practices in schools will contribute to increased disaster preparedness.

He said to cope with disasters, Indonesia needs to adopt Japan's tsunami tendenko practice - which says that the individual should not stay and help others but run and preserve his or her life instead.

"The prerequisite is to know risks in surrounding environment and to pick places of evacuation or assembly points that are safer than houses, schools or offices," he said.

He added: "It is also necessary to hold drills routinely for all age groups. Based on Japan's experience, it is sufficient to have them only once or twice a year, as long as they are carried out consistently."