This follows UN suggestion and comes amid calls against Ahok's jailing

The European Union, Asean Parliamentarians for Human Rights and Amnesty International, among others, have also expressed concerns over the guilty verdict.

Mr Yasonna was speaking to reporters after returning from Geneva, where he attended the UN-sponsored Universal Periodic Review, or UPR.

Representatives from Indonesia and 13 other UN member states were in Switzerland for a periodic review of its human rights records.

"When I was in Geneva attending the UPR, there were demands and recommendations in regard to (Indonesia's laws on) religious minorities, freedom of expression, religious freedom, blasphemy and others," said Mr Yasonna.

"We will discuss it progressively, and a thorough review is also needed, but there are already decisions relating to that matter."

The minister was referring to Article 156(a), which criminalises anyone who deliberately, and publicly expresses feelings of hostility, hatred or contempt against religions with the purpose of preventing others from adhering to any religion.

Mr Yasonna did not provide a timeline or details of the review of 156(a) and his ministry also did not reply to queries from The Straits Times on Monday about the move.

His announcement of the review came a day after a district court sentenced Basuki, a Christian minority politician, to two years in jail for blasphemy against Islam.

When I was in Geneva attending the UPR, there were demands and recommendations in regard to (Indonesia's laws on) religious minorities, freedom of expression, religious freedom, blasphemy and others. We will discuss it progressively, and a thorough review is also needed, but there are already decisions relating to that matter.

It was the second major setback for the popular politician, better known by his Chinese nickname Ahok, in as many months. Basuki had lost to former culture and education minister Anies Baswedan at the gubernatorial election last month.

The decision to hand Basuki a heavier sentence - after the prosecution had recommended probation - was panned by critics, who said the judges had bowed to public pressure by hardline Muslims.

"We are concerned by (the) jail sentence for (the) Jakarta governor for alleged blasphemy against Islam," said UN Human Rights Asia in a tweet last Tuesday shortly after the hearing. "We call on Indonesia to review (its) blasphemy law."

The law was first enacted by founding president Sukarno and later implemented by his successor, Suharto, in 1965.

Human rights group Setara Institute said that of 97 cases brought to court since then, 89 were filed after the fall of Suharto in 1998.

Amnesty International, however, said it recorded 106 convictions for blasphemy cases, including some that received prison sentences of up to five years, when Dr Susilo Bambang Yudhoyono was president from 2004 to 2014.

While lawyers and human rights activists The Straits Times spoke to yesterday welcomed the move to review what they say is an archaic law, most remain sceptical about any near-term change.

Indonesian legislative expert Amir Karyatin said such reviews typically go through a long and onerous process, and he expects resistance from conservative groups. 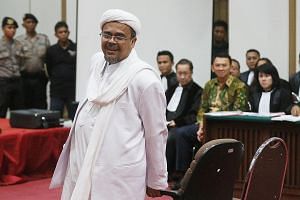 "The government would first have to propose any changes to Parliament and all relevant parties - including religious leaders, legal experts - must be invited and be heard on their views,"he said. "If they see more negatives than positives in doing so, they would not go ahead."

"I don't agree with scrapping it," he told The Jakarta Post yesterday. "Can you imagine what would happen if there was no regulation and then someone insulted a religion? People would use their own 'legal system'."

A version of this article appeared in the print edition of The Straits Times on May 17, 2017, with the headline 'Indonesia to review anti-blasphemy laws'. Subscribe
Topics:
More
Whatsapp Linkedin FB Messenger Telegram Reddit WeChat Pinterest Print Purchase Article Copy permalink