JAKARTA (THE JAKARTA POST/ASIA NEWS NETWORK) - The 2018 Asian Games is just six months away and the Indonesian government has decided to focus on air quality in the host cities of Jakarta and Palembang, South Sumatra, given the high level of air pollution in the country.

The Environment and Forestry Ministry recently informed President Joko Widodo that the country needed to use cleaner gasoline - of a standard known as EURO IV - to reduce air pollution from petrol-guzzling vehicles.

Speaking after a Cabinet meeting to discuss the country's readiness to host this year's Games, Coordinating Maritime Affairs Minister Luhut Panjaitan confirmed that reducing air pollution had already been on the government's agenda ahead of the prestigious sporting event.

However, when asked about the details, such as securing supplies of EURO IV standard gasoline, Mr Luhut said, "I don't know the technical [details] yet, but yes, we have plans to reduce air pollution."

Air quality monitoring conducted by the Environment and Forestry Ministry between January 2017 and January this year indicated that the level of fine particulate matter air pollutant, known as PM2.5, had reached 35 and 12 micrograms per cubic metre in Jakarta and Palembang, respectively.

Although these readings did not exceed national ambient air quality standards, which stand at 65 micrograms pcm, the level in Jakarta exceeds the standard set by the World Health Organization, which is 25 micrograms pcm. 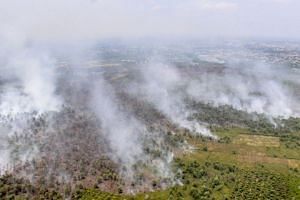 Last year, the ministry issued a decree on exhaust emission levels from new motor vehicles that are set in accordance with the EURO IV standard. The decree states that cars, among other vehicles, must use fuel with a minimum research octane number (RON) of 91 and a sulfur content of no higher than 50 parts per million (ppm).

Ms Siti said she had proposed to Mr Joko to implement the regulation gradually, starting in Palembang and Jakarta. "Pertamina must prepare gas stations where Pertamax Turbo or other EURO IV standard clean gasolines are available," she said.

The minister said in the report her previous discussions with relevant ministries and state-owned energy firm Pertamina concluded that Pertamina could ensure the supply and distribution of EURO IV standard gasoline by May 2018 at the latest.

Jakarta Governor Anies Baswedan said the administration was set to offer some 1,500 Transjakarta buses to transport visitors to sporting venues in the capital in order to help ease traffic congestion during the event.

When asked how Jakarta would implement measures to reduce air pollution, Mr Anies said he would first study the data.

Mr Imam, who was accompanied by undersecretary for sports achievement Mulyana, visited the aquatic and weight lifting training camp in Jakarta to check on each team's preparations for the Games.

"I want to make sure that [things like] salaries, accommodation and other needs such as nutritional requirements and supplements are all in order. I will check on this regularly because the government has distributed all the funds to the sport federations," he said.