Interpol tipped off Indonesian authorities that the stateless STS-50, a vessel with a notorious maritime rap sheet, would be entering the South-east Asian nation's waters, with authorities concerned the crew were being forced to work.

The boat, captured on Friday some 95 kilometres from Weh Island in Aceh province, had 20 Indonesians, two Ukrainians and eight Russians aboard, including the captain, a senior navy official said.

The crew have been detained and are now being questioned.

The Indonesian sailors said they were not paid and that their passports and other documents had been taken away as soon as they boarded the ship nearly a year ago, the navy said.

"These Indonesians had been sailing for 10 months without being paid so that's why we suspect there was slavery happening," Indonesian navy deputy chief Achmad Taufiqoerrochman said.

The 258-metre-long vessel, which was flying the flag of tiny African nation Togo, has previously flown flags from a string of countries, including Japan, South Korea and Mozambique, authorities said. 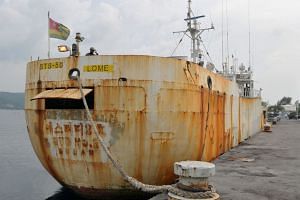 It was on the run after escaping detention in China and also fleeing seizure in Mozambique.

Before it was caught in Indonesia, the vessel used several other names, including Sea Breeze, Andrey Dolgov, and Aida, according to the fisheries ministry.

The vessel was equipped with some 600 gillnets - banned in some waters - targeting cod species and Antarctic toothfish. It is also suspected of involvement in "organised transnational crime", the ministry added without elaborating.

Jakarta has launched a tough crackdown on illegal fishing which involves sinking foreign vessels caught fishing without a permit after impounding the boats and removing the crews.