It wants maids to live separately from bosses; move to be made in phases from as early as next year

Indonesia says it will stop sending new live-in maids abroad from as early as next year. Its authorities want domestic workers to live separately from their employers in dormitories, work regular hours, and get public holidays and days off.

The Indonesian Ministry of Manpower's director for the protection and placement of Indonesian migrant workers abroad, Mr Soes Hindharno, told The Straits Times that, in turn, employers will get "better-quality" workers. They will be certified in Indonesia and trained to excel in specific skills, such as cooking, childcare and eldercare.

"They are also free to do other chores, but don't penalise them if they don't do too well in areas outside their skill set. We want better protection for our workers. If they are always indoors, we don't know if they have worked overtime. They should be compensated for that." 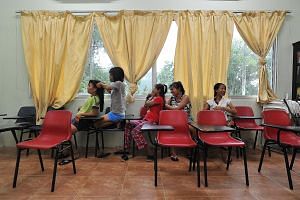 The move will be made in phases and will first require meetings with the authorities in receiving countries, including Singapore.

Mr Soes said the initiative will affect only new workers. Maids already working in households abroad who are happy with their employers can extend their visas.

We want better protection for our workers. If they are always indoors, we don't know if they have worked overtime. They should also be compensated for that.

MR SOES HINDHARNO, the Indonesian Ministry of Manpower's director for the protection and placement of Indonesian migrant workers abroad.

The move is part of Indonesian President Joko Widodo's plan to professionalise informal employment. A road map to stop sending Indonesian maids abroad by next year was announced by the previous administration in 2012, amid worries about maids being mistreated.

Indonesia is the biggest source country for maids in Singapore, with around 125,000 working here.

Concerns have been raised in Indonesia about the working conditions faced by live-in maids working abroad, and progress on addressing them has not been made fast enough, according to Association of Employment Agencies (Singapore) president K. Jayaprema.

The association has been working closely with the Indonesian authorities to address these concerns. Ms Jayaprema said: "We also want to ensure quality domestic workers can continue to come to Singapore."

Agents said they support formalised training, but logistical issues like lodging, travel and housing will need to be settled if maids live out.

"It might be difficult to get all employers on board," said Nation Employment managing director Gary Chin, adding that some might be concerned about unpredictable delays during maids' commutes.

One employer, a banker who gave her name as Madam Molly, 53, said she would prefer to have a helper at night as she sometimes works late. "She doesn't have to do anything after dinner, but it's just good to have an adult at home with the kids," said the single mother of two.

Mr Jolovan Wham of the Humanitarian Organisation for Migration Economics said caregivers could have formal shifts, adding: "If where you live and work is the same, working hours are not clearly defined, and being socially isolated, domestic workers can't ask for help."

A spokesman for Singapore's Manpower Ministry said it had not received any information from Indonesia about the request for live-out maids, and the live-in requirement is not peculiar to Singapore, as Hong Kong, Taiwan and Malaysia have the same requirement.

"Singapore does not condone mistreatment of foreign domestic workers and has taken errant parties to task," said the spokesman.

Indonesian maid Aisyah, 27, who goes by only one name and has been living in Singapore for six years, was happy to hear about the possibility of a live-out arrangement. "My situation is okay but I have some friends who say they need help but cannot get it because they are always at home," she said.

"Living outside will give us more free time, more friends, but some might prefer to stay at home if employers treat them like family."