JAKARTA (Reuters) - The Speaker of Indonesia's Parliament on Tuesday (July 18) denied allegations that he helped cause big losses to the state in connection with the issuance of electronic national identity cards.

Mr Setya Novanto, chairman of Indonesia's second-biggest political party, Golkar, made the denial to reporters after a meeting with leaders of the House of Representatives.

The speaker said he read media reports saying he was named by the independent Corruption Eradication Commission (KPK) as a suspect in the alleged state loss of at least 2.3 trillion rupiah (S$236.59 million) from the identity card programme.

Late on Monday (July 17), KPK Chairman Agus Rahardjo told reporters that a legislator with the initials "SN" was suspected to have abused his authority to benefit himself or others while the electronic identity card, known as e-KTP, was put in place in 2011 and 2012.

The KPK always refers to suspects by their initials and never confirms their full names. After Mr Rahardjo's statement, many Indonesian media named Mr Setya as the suspect the agency is investigating.

On Tuesday, Mr Setya told reporters he would obey the legal process, but said he was "shocked" by the allegations and denied any wrongdoing.

"Whatever I'm accused of is not true," he said. "If they say that I received funds, I've never done that. The sum of that money is incredibly huge. How was it transferred, how was it received?"

The KPK has been investigating allegations that sums ranging from US$5,000 to US$5.5 million - money generated by marking up the costs of the e-KTP procurement - were divided up in a room in Parliament.

In March, two public servants on trial for corruption linked to the e-KTP case named at least 37 people, including Mr Setya, who they said had benefited.

Despite repeated efforts by politicians to undermine it, the KPK has remained independent and highly popular with the Indonesian public.

It is also seen as crucial for Mr Joko's drive to battle graft in the country that ranked 90th out of 176 in Transparency International's Corruption Perceptions index last year.

The decision to designate Mr Setya, whose Golkar party is part of Mr Joko's coalition, as a suspect is "a very positive sign", said Mr Keith Loveard, a Jakarta-based analyst at Concord Consulting. 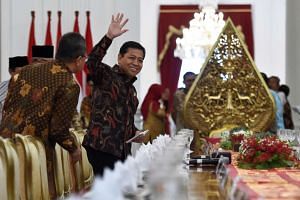 "This most certainly demonstrates how tough the KPK is," Mr Loveard said, adding that Mr Joko is unlikely to get in the way of the KPK's investigation in the e-KTP case.

"While all the parties are virtually implicated, including the PDI-P, public support for the KPK remains extremely high. So for him to attempt to slow the process or to create obstacles would be very damaging to his popularity," Mr Loveard added.

In late 2015, the Parliament's ethics committee launched a probe into allegations by a Freeport Indonesia executive that Mr Setya had tried to extort US$1.8 billion worth of shares from the local unit of the US mining company.

Mr Setya denied the allegations but stepped down temporarily. He was reappointed as speaker a year later after he was cleared by the Parliament's ethics panel.