JAKARTA - Indonesia’s Industry Minister Airlangga Hartarto said on Monday (Feb 19) he has offered the development of three industrial estates in the country to Singapore.

He said the concept of the estates was similar to the development of other industrial estates in the country, such as the Kendal Industrial Park in Central Java, The Jakarta Post reported, citing the Kompas news website.

“Singapore is a neighbouring country that has a strategic role in the interests of Indonesia and the region,” Mr Airlangga was quoted saying.

Dr Balakrishnan had been in Jakarta for a two-day working visit that included a meeting with his counterpart Retno Marsudi, Jakarta Governor Anies Baswedan and Coordinating Minister for Maritime Affairs Luhut Pandjaitan. 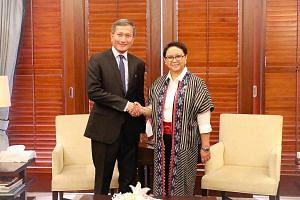 During the visit, Dr Balakrishnan said negotiations for a bilateral investment treaty between Indonesia and Singapore would begin later this month, while talks on a double taxation agreement were set to start soon. Dr Balakrishnan had pointed to the two negotiations to illustrate how the Indonesia-Singapore leaders’ retreats held in recent years had helped enhance bilateral cooperation between the two countries.

In addition to cooperating on investments, the two countries are also cooperating in improving the quality of vocational education in Indonesia. Singapore, Mr Airlangga noted, had a role in developing a furniture polytechnic at the Kendal Industrial Park that is slated to start operating this year with an inaugural class of 96 students.

Last week, the two Foreign Ministers said four more tenants had signed up to operate in the park, bringing to 36 the total number of firms there and that the park would generate about 5,000 jobs.

Mr Airlangga added that 25 principals of vocational senior high schools across Indonesia would also be taking part in a leadership training program at Singapore’s Institute of Technical Education that was expected to begin on Monday and run until March 3.