18 countries pledge support as number of those displaced in disaster rises to 48,000

Indonesia has received an outpouring of support from the international community, with 18 countries coming forward so far with offers of aid for quake-ravaged areas in Central Sulawesi.

The number of people displaced by last Friday's magnitude-7.4 earthquake and tsunami in the provincial capital Palu and Donggala regency has risen to 48,000, prompting a mobilisation of 2,300 more Indonesian military and police personnel to reinforce relief operations.

In a Facebook post, Dr Ng said he had written to his Indonesian counterpart, retired general Ryamizard Ryacudu, to express his condolences. "I assured him that the SAF (Singapore Armed Forces) stands ready to provide humanitarian assistance. Our C-130s stand ready to deliver help," said Dr Ng, referring to the military aircraft. "Our prayers go to the survivors for their pain and suffering to be alleviated."

Indonesia's Coordinating Minister for Political, Legal and Security Affairs, Mr Wiranto, who goes by one name, said air transport is the most pressing need. He added that C-130s - designed to land and take off from short runways - are one of the few planes able to operate from Palu airport, where about 200m of runway has been damaged by the quake.

Leaders from around the world - including South Korean President Moon Jae-in, Russian President Vladimir Putin and Pope Francis - have sent their condolences and pledged support since the news of the catastrophe broke last week.

European Union foreign policy chief Federica Mogherini said on Sunday that the EU has offered its full support, and has activated an emergency satellite mapping service to help.

President Joko Widodo on Sunday night gave the green light for his government to accept international help for urgent disaster response and relief. A team led by the Coordinating Ministry for Political, Legal and Security Affairs will handle all matters to do with assistance, said the Foreign Ministry.

Countries that have come forward include Singapore, the US, Australia and South Korea, he added.

Central Sulawesi was hit by a magnitude-6.1 earthquake last Friday afternoon, before a stronger magnitude-7.4 temblor struck, triggering a 7m-high tsunami, which caused widespread devastation across the province, flattening villages, housing estates and other built-up areas.

Since then, 254 aftershocks have been recorded. 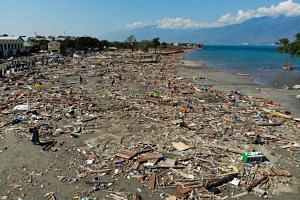 The lack of drinking water, food, fuel and electricity added to rising tensions among residents. Hundreds descended yesterday on Palu airport, hoping to be evacuated by military transport over fears of aftershocks.

The current official count is 844, but the toll is expected to rise as rescuers battle against time and navigate damaged roads to reach other parts of the island, among them Donggala, a fishing town close to the epicentre of the quake.

Last Friday's tremor was more powerful than a series of quakes that killed hundreds on the Indonesian island of Lombok in July and August.

When asked if the disasters would affect the International Monetary Fund-World Bank meetings set to take place in Bali next week, Coordinating Minister for Maritime Affairs Luhut Pandjaitan said the organiser "still believes in Indonesia's readiness as a host".