Presidential hopeful Prabowo Subianto's vehement insistence on rejecting the upcoming election results - on grounds of alleged vote-rigging - could thrust Indonesia into a tense political stand-off, which some fear may lead to civil unrest in the world's third-largest democracy.

Mr Prabowo, who ran against incumbent Joko Widodo a second time, is expected to lose the presidential election by more than 12 percentage points, according to yesterday's tally of almost 83 per cent of the votes from the April 17 polls.

The country's General Elections Commission (KPU) must complete the vote count by next Wednesday, but Mr Prabowo has been adamant that he will not accept its results.

"I will be rejecting the results of the election vote count, a result that is based on fraudulent tabulations," he said on Tuesday.

Mr Prabowo has claimed that he and running mate Sandiaga Uno lost votes due to the millions of fictitious names added to voter rolls, the exploitation of state apparatus, money politics, precast ballots and data entry errors by the KPU.

He said these failings, which were uncovered by his election campaign team (BPN), go against the democratic spirit of Indonesia.

Mr Prabowo, who heads the Gerindra Party, has promised supporters that he will not tolerate such electoral fraud. I will be rejecting the results of the election vote count, a result that is based on fraudulent tabulations.

The former army general, who declared himself the winner shortly after polls closed last month, has stood by his claim, even though unofficial quick counts and interim results by the KPU continue to show otherwise.

The latest tally puts Mr Joko and his running mate, Dr Ma'ruf Amin, ahead, with 56 per cent of the votes against the 44 per cent garnered by Mr Prabowo and Mr Sandiaga.

Mr Prabowo's campaign team has filed complaints with the KPU and the Elections Supervisory Agency (Bawaslu), but the authorities have not followed up on their reports, said BPN chairman Djoko Santoso.

In 2014, Mr Prabowo also challenged the results of the presidential election, which Mr Joko won with 53 per cent of the votes.

His lawyers took the case to the Constitutional Court, claiming that ballot-tampering at some polling stations had affected the validity of possibly 23 million votes.

But the court upheld the election results after ruling that they had insufficient evidence to prove there was significant electoral fraud. 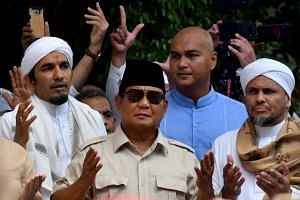 Gerindra deputy chairman Fadli Zon said yesterday that challenging the election result in court in 2014 was "a waste of time" and that it is unlikely that Mr Prabowo's campaign team will go to court this time, reported The Jakarta Post.

Professor Asep Warlan Yusuf, a legal and political expert from Parahyangan Catholic University, said that aside from the courts, the rival camps have other recourse to settle the election conflict, such as through dialogue, a boycott of the KPU results or the use of public pressure, among others.

"What is often being echoed is a call for a 'people power' movement," Prof Asep said, warning that such a campaign could potentially result in a repeat of the civil unrest which preceded the fall of former president Suharto in 1998.

Mr Prabowo's latest remarks came just after police took action against a few of his political allies, following their call for "people power" to protest against the interim vote count.

One of them is National Mandate Party politician and lawyer Eggi Sudjana, who was arrested on Tuesday for instigating a protest to delegitimise the KPU results. He now faces charges of treason.

Last week, supporters of Mr Prabowo held two rallies outside the Bawaslu building to protest against the interim results and pressure the poll watchdog to act on the allegations of electoral fraud.

More of such rallies are expected in the days ahead.

But Indonesian Institute of Sciences political expert Syamsuddin Haris said such protests will have a limited impact and are unlikely to escalate into mass unrest, as the general public will accept the results.

"The election was free, fair and democratic, and while there may be fraud uncovered in some polling stations, it will not be significant," said Prof Syamsuddin.

SEE OPINION: The long and short of elections