JAKARTA - An Indonesian court on Tuesday (April 17) ruled that the seizure of a luxury yacht linked to a US investigation into scandal-ridden state fund 1Malaysia Development Berhad (1MDB) was invalid and without legal basis.

"We declare the confiscation by police as invalid and legally baseless," Justice Ratmoho told the hearing at the South Jakarta District Court.

On Feb 28, Indonesian police in Bali confiscated the 92-metre, Cayman Islands-registered Equanimity yacht off Bali as part of a joint operation with the US Federal Bureau of Investigation.

Mr Ratmoho said the seizure should have been carried out "under the reciprocal legal assistance framework as stipulated by the 2006 law, which gives the mandate to the law and human rights ministry,” and not the police.

The US Department of Justice had earlier alleged that the Equanimity, valued at US$250 million (S$328 million), was among assets purchased by Malaysian banker Low Taek Jho, also known as Jho Low, using funds siphoned from 1MDB.

The funds, believed to be more than US$4.5 billion, were laundered in several countries including the US. The department filed a civil case in June 2017 in a bid to recover the assets.

Mr Ratmoho also said there has been no court ruling that the owner of the yacht committed a crime. “(If) there is no (proven) crime, there should not be any confiscation,” he said. 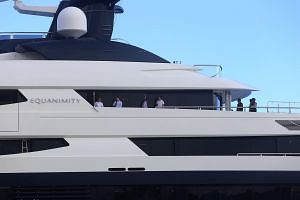 The US court documents say that Mr Low, an associate of Malaysian Prime Minister Najib Razak, had no formal role at 1MDB, but had considerable decision-making influence.

But in early March, Malaysia's national police chief Mohamad Fuzi Harun, citing an on-going investigation, said Mr Low never worked for 1MDB and he did not make any business decision for the company.

The Bali police had planned to hand over the confiscated yacht to the US authorities after the Feb 28 seizure, but the company claiming legal ownership of the yacht took the matter to court in Indonesia, citing legal flaws.

Mr Andi Simangunsong, a lawyer representing Equanimity Cayman Ltd, told reporters earlier this month (April) that the yacht was not linked to any criminal case in Indonesia, therefore the local police had no authority to seize the vessel.

He added that a reciprocal legal assistance arrangement between Indonesia and a foreign country is possible but it must go through the law and human rights ministry, not just through the police,

He argued that the handing over of the yacht to the US authorities by the police would constitute a breach of legal procedures.

1MDB's woes have weighed down Datuk Seri Najib politically, following a July 2015 revelation that some US$700 million (S$922 million) allegedly linked to the state fund were deposited into his personal accounts.

Mr Najib has said the money was a political donation from Saudi royals. He has been cleared of any wrongdoing by the Malaysian authorities.