An Indonesian court has banned Jemaah Ansharut Daulah (JAD), the country's most active militant network responsible for several terror attacks in the past two years, along with groups linked to the Islamic State in Iraq and Syria (ISIS).

JAD was charged on July 24 with being an organisation responsible for widespread terrorism, the loss of lives and the destruction of property. The group has also pledged allegiance to ISIS.

Yesterday's ruling would allow the authorities to arrest and prosecute any member linked to JAD, including sleeper cells.

The group is behind several terror attacks, including a gun-and-suicide-bomb attack in Jakarta in 2016 that left four bystanders dead.

"There is convincing evidence... of terror attacks that were carried out by members of JAD in various places in Indonesia," presiding judge Aris Buwono Langgeng told a courtroom in Jakarta as former JAD leader Zainal Anshori sat in the defendant's seat.

"What the defendant, that is JAD, did was create public anxiety and fear," he added.

JAD was formed in October 2014, four months after ISIS leader Abu Bakr al-Baghdadi declared the establishment of a caliphate, or Islamic state, in the territories it controlled in Iraq and Syria.

There is convincing evidence... of terror attacks that were carried out by members of JAD in various places in Indonesia... What the defendant, that is JAD, did was create public anxiety and fear. 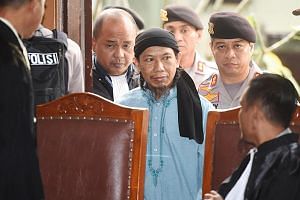 The purpose of establishing JAD was to gather militants from a motley collection of networks, not only in Java but also across Indonesia, into one group which then pledged allegiance to al-Baghdadi.

Radical cleric Aman Abdurrahman founded JAD in Nusakambangan, the country's Alcatraz-like island prison in Cilacap, in the presence of three invited visitors: Zainal, senior militant Abu Musa, who later went to Syria to fight alongside the ISIS, and a younger militant close to the cleric.

Aman was sentenced to death in June for his role in inciting others to commit terror attacks in Indonesia.

Zainal, who was the JAD leader in East Java province, took over the helm from Abu Musa and helped to expand the network across not only Java but also Sumatra, Kalimantan and Sulawesi.

In late May, Indonesia passed an amended anti-terror law that allows the authorities to make pre-emptive arrests and detain terror suspects for longer periods based only on preliminary leads.

The new law also penalises anyone who is a member of a group declared by a court as a terrorist organisation, even if the person has not committed a concrete act of planning or launching an attack.

This stipulation would allow police to act pre-emptively before an attack is carried out. Anyone who is a member or who recruits others to be a member may be jailed for between two and seven years.

Founders, leaders, officials or anyone controlling the organisation may face a minimum sentence of three years' jail and up to 12 years' jail.

Before the amended anti-terror law was passed, the Indonesian authorities could not prosecute an individual just for being a member of a militant network. "Now, if the police can establish that someone is a member of JAD or an ISIS-affiliated network, the court can send him to jail," Mr Adhe said.