JAKARTA (THE JAKARTA POST/ASIA NEWS NETWORK) - The United Kingdom has called on Indonesia to stand with it in demanding Russia admit responsibility for an allegedly state-sponsored poison attack in a British town.

UK Ambassador to Indonesia Moazzam Malik said on Thursday (March 15) that his country had urged its partners around the world, including Indonesia, to help counter Russia's bad behaviour in international affairs, particularly the recent nerve agent poisoning of former Russian spy Sergei Skripal and his daughter Yulia in Salisbury.

They have been critically ill in a hospital since they were found on March 4.

"We believe that the UK and indeed our partners around the world must take firm steps to encourage Russia to behave more responsibly in international affairs," he said at the Shangri-La Hotel in Central Jakarta.

Mr Moazzam said he had been in touch with Foreign Minister Retno Marsudi, as well as other officials, to explain the UK's concerns regarding the matter.

"My colleagues in the ministry and Retno have taken a look at the situation and we agreed that we will stay in touch on new developments. As they occur, we will have some discussions," he said.

Following the expulsion of 23 Russian diplomats, London has decided to take further steps to isolate and pressure Russia in the hope that Moscow would cooperate over the attack, which involved a rare Soviet-made chemical weapon called Novichok, Mr Moazzam added.

London, he said, was seeking discussions in international forums, such as the United Nations Security Council, while signalling that Britain would not send any Cabinet ministers or members of the royal family to the World Cup in Russia this summer.

The measures were taken following Moscow's uncooperative responses to London's inquiry about the poisoning.

"We asked the Russian government as the sole producer of Novichok to either explain to us how they lost control of their stockpile or how they came to be involved in this attack," said Mr Moazzam.

"They...declined to provide an explanation. Therefore, our security council and prime minister have concluded that this is very likely an attack carried out by the Russian state." 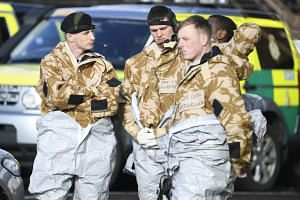 The attack, which Mr Moazzam said was the first with chemical weapons in Britain since 1945, confirmed a pattern of bad behaviour against the international community by Russia in recent years, he added.

Mr Moazzam said Russia's "bad behaviour" involved the downing of an aircraft, apparently referring to the shooting down of Malaysian Airlines flight MH17. The Boeing 777-200 was flying from Amsterdam to Kuala Lumpur on July 17, 2014, over the Ukrainian-Russian border when it was hit by an anti-aircraft missile launched from an area controlled by pro-Russian rebels.

Separately on Thursday, Moscow warned that it would retaliate "very soon" for Britain's expulsion of its diplomats.

Moscow had denied any involvement and Mr Lavrov said on Wednesday that Russia could not have any such motives.

"Such motives might certainly exist in the minds of those who would like to push ahead with the Russophobic campaign in all spheres of human activity without an exception," he said as reported by Tass news agency.

On Thursday, Mr Lavrov accused London of behaving in a "boorish" way, adding that this was partly due to the problems Britain faced over its planned exit from the European Union next year.