Forces can be deployed quickly, flexibly to handle security situation in various regions

Indonesia's three new joint defence commands, Kogabwilhan, which are designed for flexible and quick deployment to any security situation, will be led by three-star generals. Equipped with naval, air and army assets, each Kogabwilhan will be responsible for the country's western, central and eastern parts.

The command centre overseeing the western part of Indonesia is located in Tanjung Pinang in the Riau Islands, the province which covers Batam and Bintan and is the closest to Singapore.

"There are a lot of threats coming from the Malacca Strait... We also need to guard the North Natuna Sea," the armed forces commander, Air Chief Marshal Hadi Tjahjanto, told reporters yesterday at the Halim Perdana Kusuma air base in Jakarta after the inauguration ceremony for the Kogabwilhan commanders.

Another command centre is located in Balikpapan, East Kalimantan province. This command will beef up the air defence of the region which includes the proposed site for the country's new administrative capital, according to Air Chief Marshal Hadi.

The third command - in Biak, Papua - will help maintain security in the West Papua region's borders as well as its waters, he said.

The eastern Kogabwilhan will be led by Major-General Ganip Warsito, who was previously the operations assistant to Air Chief Marshal Hadi.

Equipped with naval, air and army assets, each Kogabwilhan will be responsible for the country's western, central and eastern parts. 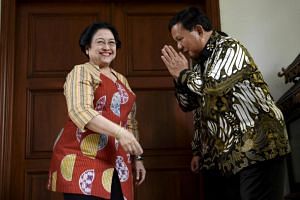 Indonesia has been making efforts to assert its sovereignty over an area north of the Natuna Islands following encroachments by Chinese and Vietnamese vessels.

Two years ago, a senior Indonesian government official unveiled a map which identified the section of the South China Sea north of the Natuna Islands as the North Natuna Sea.

Although the area lies in Indonesia's exclusive economic zone, it was previously left unnamed and was taken to be part of the South China Sea.

Indonesia maintains that it is not a party to the South China Sea dispute, in spite of diplomatic incidents involving the waters around the Natunas.

Last month, the government announced that it would seek parliamentary approval to move the country's administrative capital to East Kalimantan, near the provincial capital of Balikpapan, leaving overcrowded Jakarta to remain as the nation's centre of trade and finance.

In Papua, Indonesia is currently tackling a rising separatist movement, which the government claims has been fuelled by human rights activists hired by Western foreign governments unhappy with Jakarta's recent management of the natural resources in the region.