Tan Hui Yee The sun is low as rice farmer Sammai Kruenthong emerges from a village minimart, holding a packet of instant noodles. He waves it in my face. "This costs 10 baht per packet," he says. "But my rice is now sold for 6 baht per kg."

He adds: "I don't know what this government is eating."

Discontent is simmering in this part of north-eastern Thailand, which produces premium jasmine rice. Abundant rain this year has bumped up harvest so much that the prices of top-grade Thai jasmine rice have been the lowest since 2006.

According to data from the Thai Rice Exporters Association, the export price of such rice was US$616 (S$872) per tonne on Nov 16, down 23 per cent from a year ago.

Millers are buying the freshly harvested grain from farmers at 6,000 baht (S$240) a tonne, which barely covers Mr Sammai's cost.

The Democrat Party, rivals of Ms Yingluck's Puea Thai party, this week took delivery of 12 tonnes of rice which it will sell at cost price via specific retailers, or directly to consumers.

"We will do what we can," its deputy leader Kiat Sittheeamorn told The Straits Times, adding that it was a temporary measure.

The military government is also helping - it is running a decades-old scheme that offers subsidised loans to farmers who pledge to delay the sale of their rice, on top of other forms of aid. All the aid comes up to more than US$1 billion. The army has also sent soldiers to help farmers harvest rice.

But Premier and coup-maker Prayut Chan-o-cha is treading on delicate ground, having been brought to power by elites and an urban middle class upset at overly generous subsidies for farmers.

While successive governments have supported rice farmers since the 1980s, the Yingluck administration upped the ante by promising to buy every grain of rice from farmers at some 50 per cent above market price. The plan to drive up prices by withholding stocks from the world market failed as other rice-producing countries simply made up for the shortfall.

That Ms Yingluck is undergoing a criminal negligence trial - on top of being fined 35.7 billion baht - for her rice scheme has made General Prayut's rice intervention awkward.

But political aspirants who ignore rice farmers do so at their own peril. Agricultural workers make up some 30 per cent of Thailand's 38 million-strong workforce.

Isan, where Puea Thai draws much support, is the most populous region in the kingdom. It has been consistently allocated more constituency seats in every election - more than double that of the Democrat stronghold of southern Thailand, and at least 30 per cent more than the booming central region. 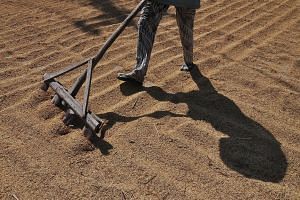 Ms Yingluck's brother, fugitive former premier Thaksin, appealed to Isan's farmers more than a decade ago when he promised - and delivered - a debt moratorium, cheap loans and low-cost healthcare on a national scale. They have returned Thaksin-backed parties over the past four elections.

This is dismissed as pork-barrel politics, but Isan rice farmers like Ms Boonsong Sithabut, 42, are clear about what they want.

"Our political power comes from elections," she tells The Straits Times while grabbing fistfuls of paddy drying in the sun. "(The government) sends police and soldiers to control us. But we keep our sense of dignity."

The government has said it plans hold a general election at the end of next year. It is not clear if any member of the junta plans to contest or if it will back a party.

While amended election rules in the new Constitution set to be promulgated will make it hard for Puea Thai to dominate, such an outcome remains possible, says political scientist Prajak Kongkirati of Thammasat University.

"Thai voters are not stupid," he says. "They are strategic."

A lot lies in the hands of the likes of Ms Boonsong, whose siblings have to sell cooked food, deliver ice, and do other odd jobs to add to the 14,000 baht the family makes each year from planting rice.

Gen Prayut has blamed rice millers for colluding with politicians to lower prices, prompting the board of the Thai Rice Mills Association to resign. Several millers declined to be interviewed, to avoid antagonising the junta.

But one said on condition of anonymity that he had warned of an impending glut in July, but "no one paid us any attention".

Rice exporters, who make a 1 per cent to 5 per cent margin on each sale, say they are hurting as well.

"Our overheads remain the same, but we have to sell more to earn the same amount of money," says Mr Vuttiphol Wanglee, the assistant to the managing director at Chaitip, an established rice exporter.

The government is trying to nudge some rice farmers to modernise and switch crops. But exporters say the rice industry will benefit from higher-yielding varieties, lower production costs, and state-level marketing campaigns when prices are expected to dip.

Farmers like Ms Boonsong are watching closely. "We will see how they can help us, and then decide who to support in the next election," she says.