KHON KAEN/SONGKHLA, Thailand (REUTERS) - In the rice-growing heartland of Thailand's northeast, Mr Kamol Suanpanya, 80, meets in the off season with fellow farmers at a community centre, where they discuss Sunday's (March 24) election, the first after nearly five years of military rule.

Like most in the area, Mr Kamol will vote for Thailand's largest party, Pheu Thai, whose government was overthrown in 2014. He is loyal because of policies like subsidies and low-cost health care pioneered by ousted premier Thaksin Shinawatra.

"I can tell you I will vote for Pheu Thai again," said Mr Kamol. "I haven't changed my mind and I never will."

Some 1,400km to the south, a longtime stronghold of the anti-Thaksin Democrat party, rubber farmer Gorneena Paearlee isn't so sure about her vote.

She has voted for the Democrats in the past, but says she will not do so again. Nor does she want junta leader Prayuth Chan-o-cha to remain prime minister, as the new pro-military Palang Pracharat party is campaigning for.

"I want to vote for change," said Ms Gorneena, 52, who owns a big rubber plantation in Songkhla province.

Sunday's general election has been cast as a struggle between democracy and military rule, with Thaksin's Pheu Thai leading the charge for a "democratic front" against Palang Pracharat, the party backing Prayuth.

The pro-establishment Democrats are seen as a possible kingmaker. 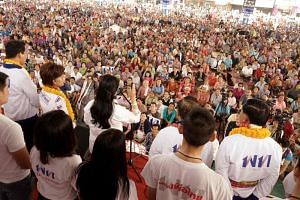 But from north to south, farmers complain about hard times and growing mountains of debt since the military took over.

Many look to the election as a way out for what they say is an economy that seems to be growing but leaving them behind.

The rice-growing northeast and rubber-tapping south reflect the deep divide in Thailand's polarised politics of the last 15 years.

Thaksin's "red-shirt" supporters are mostly from the rice-growing northeast and north, whereas southern rubber farmers have come up to Bangkok at different times over the years to join anti-Thaksin "yellow-shirt" protests of middle-class voters who support the military and royalist establishment.

The unrest has led to bloodshed and two military coups, the first toppling former telecoms tycoon Thaksin in 2006, and the last one overthrowing a government that had been led by his sister, Yingluck.

The siblings live in self-exile to avoid convictions - corruption for Thaksin and negligence for Yingluck - handed down after they were ousted. They denied wrongdoing and said the charges were politically motivated.

But while the north and northeast remain as pro-Thaksin as ever, some southerners said their support for the Democrat Party may be wavering.

With new political parties on the scene and the price of rubber languishing, some farmers, like Ms Gorneena, are considering the options.

"Rubber prices have suffered a lot, and nothing has improved under the military. I really want the new government to help fix this," she said.

While the south's rubber farmers are generally better off than their rice-growing counterparts, monthly income in the south declined by 2 per cent to 26,913 baht per household from pre-coup 2013 to 2017.

While several other rubber farmers interviewed said they would stick by the Democrats, a poll by Prince of Songkla University published last week signaled a weakening of their grip.

The poll showed 27 per cent preferring the new, progressive Future Forward Party, compared with 24 per cent for the Democrat Party, with Pheu Thai coming in at 19 per cent and Palang Pracharat at 12 per cent. It provided no margin of error.

The plight of farmers from north to south comes as a stark contrast with Thailand's top 1 per cent, who own 66.9 per cent of the country's wealth, according to Credit Suisse's 2018 Global Wealth Databook.

That makes Thailand the most unequal country in the world.

Southeast Asia's second-largest economy expanded 4.1 per cent in 2018, the fastest in six years. This year, the state planning agency predicts growth of 3.5-4.5 per cent.

At the same time, household debt soared to a record 12.56 trillion-baht in the third quarter of 2018, or 77.8 per cent of gross domestic product, central bank data showed.

For many Pheu Thai supporters, hard times have led to borrowing and left them pining for the party's populist policies.

In the northeastern city of Khon Kaen, Ms June Kit-Udom, who at 61 is the sole provider for her family of three, said she quit rice farming a few years ago because prices plunged following the 2014 coup.

She now works seven days a week at a recycling factory for 325 baht a day, but she says the tough work has resulted in spiking hospital bills.

"Life was better under Yingluck's government. She helped us a lot with cash subsidy. This government gave us nothing," Ms June said.

Some 3.6 million households in the northeast are in debt, accounting for more than a third of the total, according to data by the National Statistics Office.

The northeast has the highest average debt per household of 179,923 baht, and the lowest average income per capita at 6,656 baht per month.

Addressing inequality should be high on the agenda of the next government, said Mr Thomas Parks, country representative of the Asia Foundation, a non-profit group focusing on development.

"Inequality and regional disparities are one of Thailand's most fundamental challenges," he said.

"We expect that any government, regardless of the election outcome, will make this a serious priority."