For Mr Verdinand Tee, 45, the stigma that can follow testing positive for HIV, hit twice.

After completing three months of a one-year contract to work as an administrative assistant in a remote corner of Afghanistan for a big international development agency, he was asked to resign. He had tested positive at a routine health check in Singapore and then was told his condition was too hazardous for a war zone.

Eighteen months later, in 2018, Mr Verdinand, an Indonesian, found out that the test result was logged in a database in his country and it raised a red flag when he tried to enter Singapore again as a tourist. He says he was eventually denied entry and put on a plane back home.

"I was treated like a criminal," says Mr Verdinand, who now works for a Jakarta-based HIV research outfit called Network for People Living with HIV.

"It was a terrible experience."

More than three decades since the first cases of HIV first emerged in South-east Asia, old prejudices towards those afflicted with the virus that causes Aids remain prevalent.Education as well as cheap and effective medication have helped turn the tide on the scourge but activists say the stigma surrounding the condition has upended the lives of those living with HIV. In part, the problem centres on the lack of legal protection, the activists say.

The disease is tearing through the gay and transgender communities in Thailand, which has the highest prevalence of HIV among at-risk groups in South-east Asia. The health services make anti-retroviral medications cheap and available, but Mr Chalermsak Kittitrakul, coordinator for the Access to Medicine Campaign at the Aids Access Foundation in Bangkok, says those who carry the virus risk losing their jobs should they fail annual company health checks.

Mr Chalermsak says his organisation was assisting in the case of a nursing student who was expelled from a Bangkok university after he tested positive for HIV. "Attitudes can be just as hard towards HIV-positive people in Bangkok as they are in small towns," he says. "We don't have the laws to protect HIV-positive people."

To be sure, barring HIV-positive children from school is not restricted to Thailand. Late last year, the authorities in the province of North Sumatra barred three HIV-positive orphans from attending school, yielding to the demands of worried parents.

Cracking down on those infected with HIV can resonate with conservative communities in Indonesia. Ahead of legislative elections in the country, slated for April, politicians have used data on HIV infections as a means of whipping up anti-gay sentiment.

Local government heads in the conservative bastions of West Java, as well as in South Kalimantan, have each published the numbers of gay men who are HIV-positive. The data was gleaned from publicly funded local Aids councils, which are in charge of collecting data on HIV infections and overseeing treatment.

Indonesian law shields the identities of HIV-positive patients, entrusting that data with the Ministry of Health in Jakarta. Combating stigma and ensuring anonymity are key to encouraging testing and treatment for the virus, says Amsterdam-based Rico Gustav, executive director of the Global Network of People Living with HIV.

The approach is having some success. New infections in Indonesia peaked at about 70,000 in 2006 and have retreated to just under 50,000 in 2017, data collected by the Joint United Nations Programme on HIV/Aids (UNAids) showed.

But roughly a fifth of gay Indonesian men who test positive for HIV either do not seek treatment or eventually stop taking their medicine in part because they fear the backlash from family members and employers if their condition is uncovered.

"Education is the key," says Mr Gustav, who is HIV-positive.

Just how prevalent the anti-HIV stigma is throughout the region is tough to gauge. What data there is suggests that attitudes are beginning to soften in some countries. 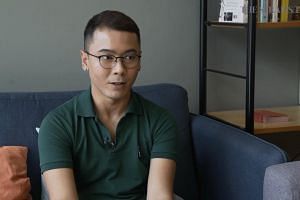 HIV data leak: 'I'm not dirty even though I have HIV' 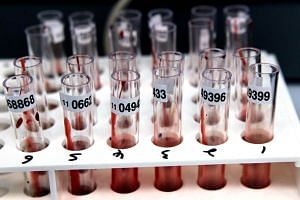 HIV data leak: 'I had to go to work and face some pointed looks'

HIV data leak: Having HIV can't get you fired but could affect chances of getting a job

In Vietnam, a survey by UNAids suggests that fewer people living with HIV are suffering rights violations. In 2011, more than 21 per cent of the 1,600 respondents in the survey reported some sort of stigma or discrimination. By 2015, that percentage nearly halved. The organisation is conducting similar surveys in the Philippines and Indonesia.

But anti-HIV stigma is still proving difficult to overcome for many of those with the condition, something Mr Acep Saepudin knows all too well.

In September, the 23-year-old tested positive for HIV. A month later, he took to YouTube to tell viewers about his experience, hoping to dispel the stigma surrounding the disease.

In one video, he discusses his results. Another features a discussion with his understanding parents. The early videos drew more than two million views within weeks and a slew of encouraging comments.

Lately, though, the comments have turned venal, some suggesting that the bespectacled university student, who hopes to graduate this year, is cursed by God. Although Mr Acep, who is gay, has not discussed his sexuality on the videos, many of those comments nevertheless disparage him. Several tell Mr Acep that he should "go and die".

"At first the response was positive. But now there are many more bad ones," he says.

He says his future in Indonesia is bleak. A job with the government or a company seems unlikely, given his status, says Mr Acep, who is considering emigrating.

"Maybe I can work for an NGO (non-government organisation), or start a business," he says. "I don't know what the future holds."

A version of this article appeared in the print edition of The Sunday Times on February 03, 2019, with the headline 'In Asia, old stigmas are proving resilient for those with virus'. Subscribe
Topics:
More
Whatsapp Linkedin FB Messenger Telegram Reddit WeChat Pinterest Print Purchase Article Copy permalink