The widow of the late Philippine dictator Ferdinand Marcos has been sentenced to at least 42 years in prison over graft charges involving some US$658 million (S$906 million) that her family was accused of hiding through foundations set up in Switzerland.

It sentenced her to six to 11 years in prison on each count.

The court also disqualified her from seeking public office. The 89-year-old is running for governor of the northern province of Ilocos Norte, her family's stronghold.

She was allowed to post bail while appealing against her conviction.

Marcos is best known for leaving behind more than 1,200 pairs of shoes when her family fled the Philippines following an army-backed uprising in 1986.

Her husband, Ferdinand Marcos, who was president for nearly two decades, was accused of amassing more than US$10 billion while in office. He died in exile in 1989.

President Rodrigo Duterte's spokesman, Mr Salvador Panelo, said the decision proved "the executive branch is not in the business of exerting undue interference or influence in the affairs of another separate and independent branch of the government".

The Marcos family is a close ally of Mr Duterte, a self-professed fan of the late dictator and his strongman ways.

Mr Duterte has said graft and illicit drugs were so entrenched in the Philippines that if he were not around, it would be better off run by a dictator like Marcos.

Marcos' daughter, Imee, is running for a seat in the Senate with backing from a political coalition formed by Mr Duterte's daughter. 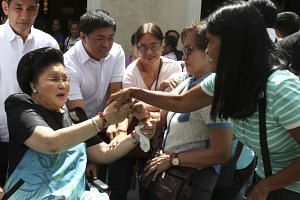 The graft cases, filed in 1991, stemmed from allegations that Marcos had financial stakes in at least seven foundations set up in Switzerland while she was a government minister and governor of metropolitan Manila from 1978 to 1986, and an MP from 1978 to 1984.

Government prosecutors said her involvement with these foundations while serving in government broke the law.

A government agency created to recover money purportedly stolen by the Marcoses had identified at least US$658 million stashed away in Switzerland via foundations set up by the family's lawyers and financial advisers.

Lawyers for Imelda Marcos had argued that "mere participation" in the Swiss foundations did not violate the Philippines' anti-corruption laws because it did not involve any government transaction.

The Commission on Human Rights called Marcos' conviction "a triumph for the Filipino people".

Representative Carlos Zarate, of the left-leaning Bayan Muna (People First) party, said the decision "puts to rest the Marcos family's contention that they have not amassed ill-gotten wealth nor plundered the country's coffers during their reign".