Court looking at whether there is enough proof for full investigation

Prosecutor Fatou Bensouda will look at whether there is enough evidence to warrant a full investigation into Myanmar's military crackdown, which has seen some 700,000 people flee into neighbouring Bangladesh.

The move on Tuesday comes nearly two weeks after judges ruled that even though Myanmar has not signed up to the Hague-based ICC, the court still has jurisdiction over crimes against the Rohingya because Bangladesh is a member.

"I have decided to proceed to the next phase of the process and to carry out a full-fledged preliminary examination of the situation at hand," Ms Bensouda said in a statement.

She said the initial probe "may take into account a number of alleged coercive acts having resulted in the forced displacement of the Rohingya people, including deprivation of fundamental rights, killing, sexual violence, enforced disappearance, destruction and looting".

She said she would also consider whether other crimes would apply to the plight of the Rohingya "such as the crimes of persecution and other inhumane acts".

A preliminary examination can lead to a formal investigation by the ICC - which was set up in 2002 to investigate war crimes and crimes against humanity - and then possible indictments. 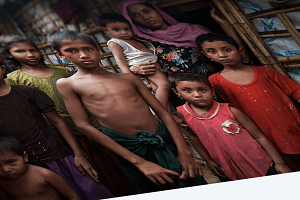 The ICC announcement came on the same day that UN investigators said Myanmar's army had used "hard-to-fathom" levels of violence against the Rohingya and should be prosecuted for genocide.

The United Nations' fact-finding mission also repeated suggestions that crimes against the Rohingya be referred to the ICC.

Rights group Amnesty International said it was "great that the ICC has opened this important avenue to justice for the Rohingya".

"Keep the momentum going - the UN Security Council needs to refer the situation in Myanmar to the ICC to ensure it can investigate all crimes under international law," the group said on Twitter.

Myanmar's army has denied nearly all wrongdoing, insisting its campaign was justified to root out Rohingya insurgents who staged deadly raids on border posts in August last year. It has also "resolutely" rejected the ICC's assertion that it has jurisdiction over the alleged crimes, saying the decision was in "manifest bad faith" and was of "dubious legal merit".

The Myanmar probe is a major advance for the ICC, which has so far largely focused on investigations into African conflicts and lacks the support of key countries, including the United States, Russia, China and Israel.

The ICC recently faced threats and criticism from US National Security Adviser John Bolton over the possibility of a war crimes investigation into US actions in Afghanistan.

Mr Bolton said the court was "already dead to us" and its judges could face US sanctions.

The court hit back at Mr Bolton, saying that it would "continue to do its work undeterred, in accordance with those principles and the overarching idea of the rule of law".

A version of this article appeared in the print edition of The Straits Times on September 20, 2018, with the headline 'ICC to probe alleged crimes against Rohingya'. Subscribe
Topics:
More
Whatsapp Linkedin FB Messenger Telegram Reddit WeChat Pinterest Print Copy permalink