Malaysia's battle against terror has resulted in hundreds of arrests since late 2013, including that of three men who the police said yesterday were planning to launch attacks on the eve of the country's National Day celebrations.

For three years, the police department's counter-terrorism unit has been on a hunting spree, rounding up at least 240 people for their involvement with Islamic State in Iraq and Syria (ISIS).

On the upside, the authorities said most of the group's local cell members have limited capability to make their own improvised explosive devices and the threat is contained. The downside is that ISIS recruits new members easily over social media and there are various cells pledging allegiance to different terrorists in Syria, making it tough to keep track of the multiple cells operating in Malaysia.

"ISIS is using small cells here, operating independently of each other," said Datuk Ayob Khan Mydin Pitchay, the counter-terrorism division chief of Malaysia's police department. "We can dismantle several cells but we won't know how many cells they have."

Malaysia has been on high alert since last year, when police uncovered threats against the country's top leadership, including Prime Minister Najib Razak.

As ISIS loses control of its stronghold in Syria, its attacks around the world have intensified and South-east Asia has not been spared.

Key architect of ISIS attacks in West killed in Syria 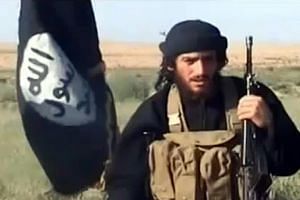 Adnani was 'being groomed to succeed Baghdadi'

Months after the Jakarta bombing, Kuala Lumpur had its first ISIS attack when eight people were injured in a grenade attack on a bar in Puchong in June. The police arrested 15 Malaysians in a counter-terrorism swoop after the attack.

While the authorities have been conducting stringent patrols in the city as well as places frequented by tourists and expatriates, the unexpected bombing of a suburban bar filled with locals showed just how difficult it is to prevent attacks.

"They're not going to attack a place filled with security personnel," said Professor Ahmad el-Muhammady, a local university professor and former trainer in the govern- ment's rehabilitation programme.

Although the group aims to launch attacks on well-known areas, there is doubt if these militants are able to do so with police and army officers stationed at major tourist attractions.

"A heightened security area would actually repel them. They don't have the guts to approach key areas but we can't rule out this possibility in the future. If they acquire new manpower, skills or capability, they might do that," said Prof Ahmad.

Ultimately, both the police and experts say it is a race against militants as the authorities attempt to stop potential attacks through intelligence work and arrests. Thus far, the police have foiled several plans for attacks and seized firearms, including an explosive device meant to attack key figures of the police force.

"ISIS is becoming more aggressive and dangerous. It's not a potential threat any more but an actual one," said Prof Ahmad.