PHNOM PENH (AFP) - Cambodian leader Hun Sen has outlasted the murderous Khmer Rouge, sidelined the monarchy and crushed his opponents in a 33-year rule defined by patronage, political agility and repression and which is set to be prolonged by Sunday's (July 29) election.

The 65-year-old is part of an elite club of world leaders to hold power for three decades, adapting to shifting political headwinds that have buffeted the poor, South-east Asian country since the Cold War.

His ruling Cambodian People's Party is poised to sweep the July 29 poll in what is essentially a one-horse race after the country's only real opposition was dissolved by the courts last year.

Critics say victory will be the culmination of years of state-sponsored violence, intimidation and deft legal footwork by Mr Hun Sen to head off an opposition which emerged as a serious threat at the last election in 2013.

It will also mark a nadir for Cambodian democracy.

"Few of Hun Sen's opponents have had the combination of ruthlessness, guile, and political acuity that have carried him through repeated cycles of Cambodian history," said Mr Sebastian Strangio, author of Hun Sen's Cambodia.

From his early days in politics, Mr Hun Sen has darted from one side to the other to climb the ladder of Cambodian power. 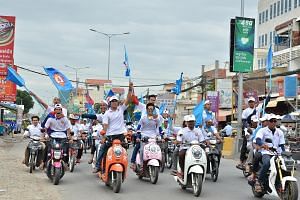 All eyes on voter turnout in Cambodia election on Sunday

Cambodia puts on armed forces display ahead of election

He was a cadre in the Khmer Rouge, an ultra-Maoist organisation that overthrew the US-backed government of Lon Nol and killed one quarter of the population from 1975 to 1979.

But to escape ever deeper purges, he defected to Vietnam, returning as their army toppled the Khmer Rouge and taking credit as Cambodia's saviour from a group he once belonged to.

The ambitious former fighter impressed his Vietnamese patrons and they installed him as Prime Minister in 1985.

Mr Hun Sen lost the first election he ever ran for in 1993, the UN-sponsored vote meant to be the dawn of a new democratic era.

But defeat only sharpened his nose for power.

He pushed to share the leadership with the victor as "second prime minister", but then seized control in a bloody 1997 coup, a year before the death of Khmer Rouge leader Pol Pot.

He's been accused of stacking the military with fiercely loyal allies that have spent decades helping him consolidate power, while handing key security roles to relatives.

While Vietnam was responsible for his rise, he has in recent years turned to China for cash and soft loans that left him less reliant on the West.

Major infrastructure projects have earned the loyalty of his base and jump-started Cambodia's economy.

A visible presence across the country, he travels frequently to the provinces, giving straight-talking speeches peppered with jokes and invective against his critics - and laden with the warning that without him Cambodia will crumble.

As times change, he has remodelled his approach, spreading his message via a Facebook page with 10 million "likes" - on a platform that could have served the opposition and its youth support.

Garment workers who once marched with the opposition now head into elections under the patronage of Mr Hun Sen, who has raised wages in a sector employing around three quarters of a million people.

"I love him the same as my parents," said garment worker Phoeung La during a recent visit by the premier to nearly 25,000 labourers in Kampong Chhnang province.

"When we meet difficulties, he is also sad."

Mr Hun Sen, calling himself "uncle", was typically direct in his demands - and tactics.

Workers were handed US$5 (S$6.80) in envelopes, while pregnant employees were given US$200 by Hun Sen himself, a give-and-take that some see as part of his strategy.

The ruling Cambodian People's Party has won every election from 1998 onwards.

But frustration with corruption among a young population with little memory of the horrors of the Khmer Rouge era gave an opening to new challengers.

Formed in 2012, the opposition Cambodia National Rescue Party (CNRP) won more than 44 per cent of the vote in 2013 and almost the same in local 2017 polls.

But their emerging threat was snuffed out.

In November, the party was banned by the Supreme Court and its leader charged for treason, while civil society and critical media have been hushed by legal cases.

Sam Rainsy, who co-founded the CNRP but now lives in self-exile in Paris, said Mr Hun Sen's years in the Khmer Rouge were formative.

"There is a tradition, a culture of violence and impunity that Hun Sen embodies perfectly," Sam Rainsy, co-founder of the CNRP, told AFP.

And he is eyeing a dynasty with his sons primed to take over when he eventually leaves centre stage.

Even his nemesis Rainsy strikes a reluctant note of admiration for Cambodia's enduring strongman.

"Hun Sen's strength, I would even say his genius, is to survive," he said.