The Mahathir Mohamad administration has said it will ask Singapore to cancel the 350km link to Kuala Lumpur - the first major project to be scrapped by the three-week old government - as it would have cost a total of RM110 billion (S$37 billion).

Former premier Datuk Seri Najib, who was also finance minister, in a Facebook post on Wednesday, said the cost of the project as of early this year stood at RM72 billion.

Mr Lim told reporters on Thursday (May 31): "No, it is more (than RM72 billion) if you include the interest component. Please be truthful. It is way above RM100 billion."

Mr Najib, who has been writing on his Facebook account to question various issues involving the new Pakatan Harapan government, said studies showed the HSR would create many jobs.

Asked about this after an event on Wednesday, Prime Minister Mahathir told reporters the project could have cost anywhere between RM60 billion and RM100 billion. 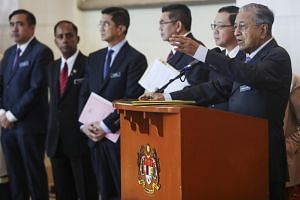 Malaysia is due to open negotiations with Singapore to unwind an agreement inked in 2016 by the previous administration.

The HSR line would have cut travel time between the two capitals to 90 minutes once completed in 2026, from about four hours by car.

Mr Lim, meanwhile, said the 197ha Bandar Malaysia project, which was to house the KL terminus for the HSR, is being reviewed.

It was owned by troubled state investor 1MDB before the land was returned to the Finance Ministry.

But one of the MRT networks, Line 3, has now been shelved as the Pakatan Harapan government reviews its finances.

A version of this article appeared in the print edition of The Straits Times on June 01, 2018, with the headline 'HSR costs above $37b with interest, KL says'. Subscribe
Topics:
More
Whatsapp Linkedin FB Messenger Telegram Reddit WeChat Pinterest Print Purchase Article Copy permalink