KUALA LUMPUR (THE STAR/ASIA NEWS NETWORK) - The homemade bombs found at a condominium unit in Malaysia's city of Petaling Jaya are not linked to the Islamic State in Iraq and Syria (ISIS) terror group, Malaysia's Deputy Premier has said.

Datuk Seri Ahmad Zahid Hamidi said on Sunday (April 17) that the incident, while definitely criminal, was not a terrorist threat.

"National security is completely under control, and while police have yet to establish a motive, we have traced a few possibilities, none of which are linked to the ISIS," he told reporters in Kuala Lumpur.

"This was caused by the actions of certain individuals."

Five homemade bombs were found by the police on Sunday morning at an apartment unit in Damansara Perdana, which forced a temporary evacuation of some 200 residents. 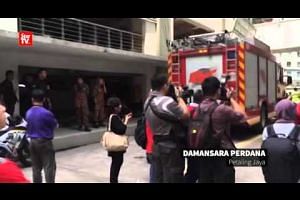 The bombs were taken to a nearby quarry and detonated.

Dr Ahmad Zahid added that the police raided the condominium unit based on complaints claiming that illegal activities were taking place there.

"Police investigations will continue... I guarantee the public, especially the residents of that apartment, that police are always prepared to handle matters of security," he said.