KUALA LUMPUR (BLOOMBERG) - Want a unique way to spend your holiday in Malaysia? How about traipsing around some controversial oil palm plantations.

Yes, you can go snorkelling in the crystal clear waters of Langkawi and taste some of the best street food in Penang, but the Primary Industries Ministry wants tourists to head to its oil palm estates and factories to have a look at how the tropical oil is grown and processed.

The minister, Ms Teresa Kok, has reached out to some of the country's key planters, and tourists may soon be able to visit the estates of Kuala Lumpur Kepong Bhd in the northern state of Perak, Genting Plantations Bhd in the Borneo region, and Sime Darby Plantation Bhd in Carey Island - just an hour and half's drive from Kuala Lumpur city centre.

The initiative by the Primary Industries Ministry, which oversees commodities and plantations, is the latest effort to improve the image of the oil that has taken a battering. With western consumers increasingly concerned over palm's links to deforestation and threat to animal habitats, the government is fighting back with a year-long "Love My Palm Oil" campaign in support of the industry.

"We're facing a perception war," Ms Kok said at the launch of the tourism initiative on Thursday (Feb 21).

"The negative palm oil campaign in the EU has influenced people for generations. and people have been told that palm oil is bad."

Ms Kok faces an uphill struggle, with the latest blow coming from a European Union Commission draft law, which is seeking to exclude the oil from the bloc's biofuels target. 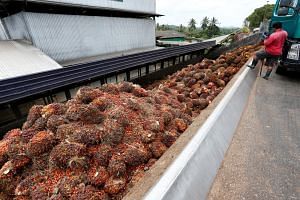 EU's palm oil curb may hurt campaign to save forests

Malaysia has hit back, with threats to take retaliatory measures against European products, though efforts so far seem ineffective.

While the government battles the anti-palm campaign from the West, tour guides are banding together to play a bigger role at home, with the Malaysian Inbound Tourists Association working with the industry to promote the oil through hotel designs, ecotourism, and answering tricky tourist questions.

The opposition to palm oil in Europe has weighed on prices. While they have risen 6.5 per cent in 2019, benchmark futures in Kuala Lumpur are still down about 20 per cent in the past two years.