A High Court judge yesterday dismissed an application by traders for a court order to stop electoral reform group Bersih and pro-government supporters from holding rallies in Kuala Lumpur tomorrow.

The three Malay trade groups had said they feared that they will suffer losses if the rallies proceed.

But the judge said they failed to provide evidence to support their claim that previous Bersih rallies led to damage to their shops.

Former prime minister Mahathir Mohamad, who is now an opposition leader, expressed his support for Bersih but said he is skipping the event because of an overseas trip. Last year, he had made a surprise appearance at Bersih's two-day rally.

Concerns have risen over potential violence due to the presence of the Red Shirts, the pro-government supporters led by Umno division leader Jamal Yunos. 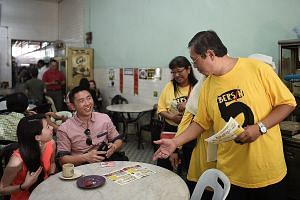 3 challenges in store for Bersih 5 rally

In court, Red Shirts lawyer Nasser Yusof said the supporters are willing to gather at a venue allocated by the police if ordered to do so.

"The stand of the Red Shirts is that we will hold a simultaneous gathering with the Yellow Shirts (Bersih supporters). If the authorities give us a suggestion or an order after this and allocate a venue for us to gather, then we will gather there. If they do not give any kind of notification, then the Red will gather where the Yellow gathers," The Star quoted him as saying.

"This is a tactic of fear to prevent urban and rural Malays from joining the rally," she said.

Speaking during his trip to Tokyo, Prime Minister Najib Razak said he does not want to see any physical clashes during the rallies. "That is not going to be good for us and that is not the culture that we will want to be accepted as our way of life in Malaysia," state news agency Bernama reported him as saying.