LANGKAWI • Mr Haziq Aziz has dared Datuk Seri Azmin Ali to take legal action against him if the Malaysian Economic Affairs Minister is confident of his own innocence.

Mr Haziq, the Santubong Parti Keadilan Rakyat (PKR) Youth chief who caused an uproar with his confession that he was the man in a viral sex video allegedly with Mr Azmin, also challenged the minister to lodge a police report against him. He should do it himself. Let's have the entire evidence and details in the open," Mr Hazi told The Star in an interview last Saturday.

To emphasise his point, Mr Haziq spoke of how the police had taken a statement from Mr Azmin, while his political secretary Hilman Idham had made a police report.

Mr Azmin, who is PKR's deputy president, has brushed aside the sex video and called it a nefarious plot to destroy his political career.

Yesterday, Mr Azmin's lawyer said that his client will not be responding to the challenge by Mr Haziq, the Malay Mail news portal reported.

"We do not act or respond according to such attention-seeking taunts," Mr N. Surendran said in a post on Twitter. "All legal responses are done as we see fit, according to our timetable & not imposed by others."

In the interview with The Star, Mr Haziq again said that he and Mr Azmin were the two men seen having sex in the video clips. 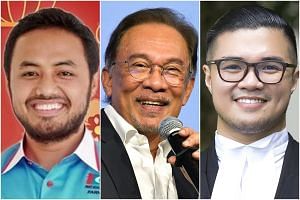 Anwar's aide says he is not behind gay sex video; Haziq sacked from ministry

The videos, which surfaced via WhatsApp on June 11, rocked Malaysia and generated countless headlines.

Mr Haziq, who was the senior private secretary to the Deputy Primary Industries Minister, has since been sacked from the post.

"I am not a liar. I want the matter to be brought open in the court so that Malaysians can see for themselves the evidence. Malaysians would then be able to see who's telling the truth," Mr Haziq, who is a lawyer, told The Star.

He said that Mr Azmin had made wrongful accusations against him.

"In fact, I am a victim of the situation. If I am defaming him, he has the right to sue me in a court of law," he said.

"Initially, I did not have anything against Azmin, as I thought we were both victims in the case. I got upset when Hilman tried to silence me and Azmin accused me of being planted by Umno and Barisan Nasional," Mr Haziq said.

"I never said anything bad about Azmin. He should lodge a police report and sue me if I am defaming him," he added.

Mr Haziq also appealed to the police to wrap up the case as soon as possible.

"The police took my second statement for four hours, 9pm and 1am on Thursday. I had to explain to them from A to Z on what happened, as they said there was a gap so I had to give more details in my story," he said.