PETALING JAYA (THE STAR/ASIA NEWS NETWORK) - The haze in Malaysia is affecting business at farms that rear poultry and produce vegetables as chickens die by the millions in a month and farm produce dwindle, with consumers set to be the biggest losers.

Vegetable production in several states is down by a third, sending prices up by more than two-fold. And farmers are saying that if the haze were to continue, prices will go even higher.

Penang and Province Wellesley Farmers Association chairman Loo Choo Gee estimated that on average two to three million broiler chickens in the northern region of Penang, Kedah, Perlis and Perak die in a month because of the haze. 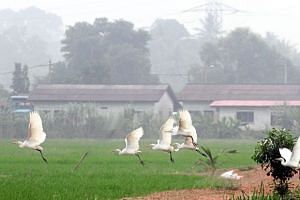 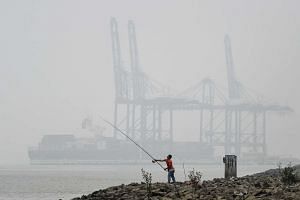 Two-month-long haze in Malaysia shrinks fruits along with profits

He added that this was a big issue every year and that at times the mortality rate could rise up to four million of the 50 million that are produced in a month in peninsular Malaysia.

"Chickens are more sensitive to the haze than humans. They have respiratory problems and become weak. We have to give them vitamins. When they are weak, they are slow to grow and that is not good," said Loo, who is also a farmer.

"Many farmers try and keep the breeder chickens that are meant for culling alive so they can lay more eggs. But even hens become weak during the haze and lay fewer eggs," said Loo.

In Johor, the owner of Lew Brothers Poultry Farm Sdn Bhd, Lew Kim Huat said that egg production at its two farms in Ulu Tiram and Layang had declined to about 5 per cent since the start of the haze.

"Our hens are becoming restless and weak,'' he said adding that about 28,000 of the 700,000 birds also died due to suffocation, about twice the usual number of deaths.

Lew said, normally each bird produces 25 eggs per month but for the past one month they produced between 15 and 20 eggs each.

In Kota Tinggi, Johor, long beans cost RM6 per kg compared with RM2 to RM3 before the haze period.

A wholesaler, Tan Pak Looi, cautioned that the price of chillies, now at RM6 per kg, was expected to rise in the next two to three months.

The current batch of chillies survived as they were planted and harvested before the haze, he added.

Tan said vegetables production had fallen due to a lack of sunlight while the lack of rain had worsened the situation.

"The weather has also affected the production of spring onions and celery which have doubled in price," he said adding that spring onions used to cost RM5 to RM6 two weeks ago, but the wholesale price is now RM12.

A vegetable supplier in George Town, V Raj, 47, said wholesale prices of vegetables from Cameron Highlands have gone up by 50 per cent.

"Profits have also been cut by at least 20 per cent. Chinese broccoli (kai-lan) increased from RM2.50 to RM5 while Chinese cabbage also rose to RM2.50 from RM1.20 and tomatoes from RM4 to RM6," he said.

Farmer Khor Tiam Seng, 38, from Cameron Highlands, said vegetable production there had dropped by 10 per cent to 20 per cent.

"I had to increase my prices in order to maintain profit. And it is the customers who will have to pay more."