JAKARTA - A mob gathered outside the Singapore embassy in Jakarta on Tuesday (Aug 23) morning to protest against the alleged mistreatment of a retired Indonesian general at Changi Airport last week.

About 40 demonstrators, who identified themselves as the Pemuda Panca Marga (PPM), arrived at the embassy just as it was opening its doors to receive visitors who wanted to pay their respects to former president S R Nathan, who died at the Singapore General Hospital on Monday night.

The embassy, like many other of the Republic's overseas missions around the world, had set up a condolence book for Singaporeans based abroad as well as friends of the country to pen tributes to the late Mr Nathan.

The members of the PPM, set up by descendants of veterans who fought against the Dutch during Indonesia's war for independence in the mid-1940s, were carrying banners demanding "Singapore must apologise to Indonesia" over the Aug 17 incident involving former three-star general Suryo Prabowo.

Mr Suryo, who retired as chief of general staff of the Indonesian armed forces (TNI) in 2012, was in transit at Changi Airport last Wednesday when he claimed he was subjected to a lengthy interview and denied entry to Singapore because he was "blacklisted for reasons that are not clear". 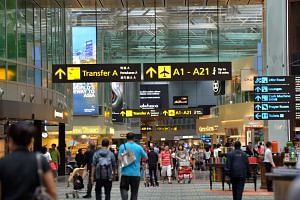 Singapore's Immigration and Checkpoints Authority (ICA), however, has since clarified that Mr Suryo was interviewed by its officers for about 30 minutes from 5.35am, and then allowed to continue on his journey.

"He was informed by ICA officers that the interview was part of the screening procedures for border security," the ICA said in a statement last Saturday.

The Straits Times understands that the PPM demonstrators left the embassy area after its representatives handed over a note of protest to a Singapore embassy official.

The embassy said in a Facebook post on Tuesday that despite the demonstration, the signing of the condolence book proceeded uninterrupted inside the embassy.

"We would like to extend our thanks to the Jakarta police for ensuring law and order, as well as the safety of the embassy during this period," added the embassy. "This was a suitable moment to recall what Mr S R Nathan had once said about the qualities needed to be a successful Foreign Service Officer of Singapore: patience, calmness, modesty, empathy and good humour.

"More importantly, he had also reminded us that Singapore foreign service officers must have patriotism and a sense of mission; integrity and honesty; and the ability to carry on with our work, even under pressure. Timeless advice."