Established in 2002, the Komisi Pemberantasan Korupsi (KPK), or Corruption Eradication Commission, is a product of Reformasi, the post-Suharto era when Indonesia had a strong impetus to tackle graft and money-laundering.

Inaugurated by then President Megawati Sukarnoputri, the KPK was initially staffed with senior police investigators.

A key reason for establishing an independent agency to tackle corruption was the strong distrust of the police after the fall of then President Suharto in 1998. Many high-ranking policemen of the day were allegedly tainted with graft.

The KPK now has a solid reputation, after achieving an almost 100 per cent conviction rate in its first 13 years of existence, according to a report by the think-tank Centre for Public Impact. 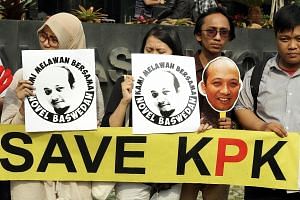 While Transparency International acknowledged the KPK's achievements, it also noted that Indonesia risked endangering the improvement if current moves to weaken the KPK continue.

But the KPK has President Joko Widodo's backing. As a sign of his high regard for the agency, Mr Joko halted proceedings at an Istana event last Thursday to move KPK deputy chief Alexander Marwata, who was seated at the back of the hall, to the front - to sit alongside his Cabinet members.