KLANG (THE STAR/ASIA NEWS NETWORK) - There is no need to interpret every move made by Malaysian Prime Minister Mahathir Mohamad in a political context and he should be given space to administer the country in his own style, said Datuk Seri Anwar Ibrahim.

The Parti Keadilan Rakyat (PKR) de facto leader was responding to speculation that Tun Dr Mahathir was attempting to sideline him by appointing Datuk Seri Azmin Ali as the Economics Affairs Minister and to the Khazanah Nasional board.

"No, that is a bit far-fetched... He has his arguments. He thinks for the interest of the nation and the institutions," Mr Anwar told reporters when he was at the house of the late Sungai Kandis assembyman Shuhaimi Shafiei.

He added that any concerns about Mr Azmin's appointment into the Khazanah board should be discussed within closed doors among party colleagues.

Mr Anwar said it was not out of the ordinary for Dr Mahathir to employ his own style of leadership, adding that he would do the same too once appointed to the Cabinet.

"He (Dr Mahathir) should be given the latitude to run the country. But you can't stop people from making all sorts of interpretations," he added.

Mr Anwar is currently campaigning for Pakatan Harapan in the Sungai Kandis by-elections, which will take place on Saturday (Aug 4). 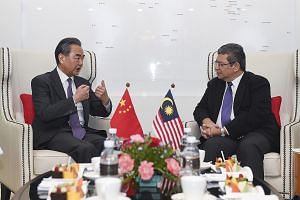 In the May 9 general election, Shuhaimi had won the seat with a 12,480-vote majority.