JAKARTA - The two giant pandas from China that are due to arrive in Indonesia next week will be available for public viewing at a local safari zoo in early November, Jakarta officials have said.

The seven-year-old pandas, on a 10-year breeding loan, will be flown from Chengdu and arrive at the Soekarno-Hatta International Airport next Thursday (Sept 28).

Cai Tao, a male bear weighing 128kg and female bear Hu Chun, weighing 113kg, will be transported in the forward cargo compartment of an Airbus 330-200 operated by Indonesian airline Garuda, said Mr Sigit Muhartono, Garuda operations director, at a joint media briefing with representatives from the Chinese embassy and the Indonesian environment and forestry ministry on Friday (Sept 22).

The bears' arrival will mark increased cooperation between the two countries on joint research of endangered species, said the acting Chinese ambassador to Indonesia Mr Sun Weide. Indonesia has shared its expertise on breeding Sumatran tigers - previously classified as endangered - with China.

Indonesia will be the 16th country to host and help breed giant pandas, Mr Sun said.

"We want to give happiness to the Indonesians, fulfilling their wishes, especially the children, to see pandas," he said. 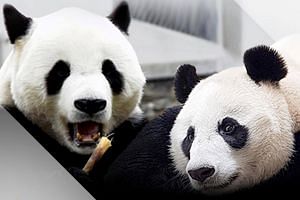 Mr Sun explained that Cai Tao in Chinese means colourful porcelain and Hu Chun is lake in springtime. "The names suit beautiful Indonesia, a country that has thousands of islands," he added.

Cai Tao and Hu Chun, however, are arriving at an awkward time in relations between Indonesia and China, largely due to Beijing's territorial claims in the South China Sea.

China is a growing investor in Indonesia, and both countries have long enjoyed friendly ties. But Beijing's claims last year that parts of Indonesia's waters off the Natunas are its "traditional fishing grounds" have led to some tension.‎

The bears, regarded by the Chinese as national treasures, will be taken to Taman Safari, a zoo in the hilly area in Bogor, West Java, about two hours' drive from the capital Jakarta, immediately after they arrive at the Soekarno-Hatta airport.

The temperature at the zoo, located 1,500m above sea level, is 17 deg C at night and 24 deg C at noon, said zoo director Mr Jansen Manansang.

"We have prepared a 10 hectare ready-to-harvest bamboo plantation and four cages for the pandas - two indoor, one outdoor, and a special one for mating," Mr Jansen said.

He added that the zoo is best suited for panda breeding, as it had some sucess in breeding endangered species.

"We managed to breed hundreds of Sumateran tigers ... We have a sperm bank for them and we are now sure that the species will not become extinct," Mr Jansen said, adding that the zoo has also managed to breed three Sumatran rhinos.