Mr Lim said the ministers discussed the matter during the Cabinet meeting, and they decided that only Prime Minister Mahathir Mohamad would speak on the issue.

"This is a G2G (government-to-government) discussion, and it should be held away from the public glare," he told a news conference at the Finance Ministry.

"The official statement will be released when it is ready. And no other ministers are allowed to make any statements on the matter, but the Prime Minister," he said.

The Straits Times reported last week that the government had cancelled the original contract with the state-owned China Communications Construction Company (CCCC).

The Malaysian government is said to be seeking to halve the estimated project cost to RM40 billion (S$13 billion).

There have been conflicting statements over the past few days on the status of the controversial RM81 billion project, which was meant to link the east and west coasts of Peninsular Malaysia. 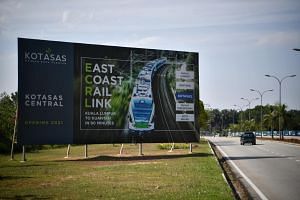 The project was approved by the previous Barisan Nasional administration in October 2016. But work on the 688km railway line was suspended last July by the Pakatan Harapan government amid criticism over the project's high cost.

Some 15 per cent of the project, to span across four states, had been completed by then.

Last Saturday, Economic Affairs Minister Azmin Ali was quoted as saying that the government had decided to cancel the project. But Mr Lim said hours later that he was "shocked" by the announcement.

On Tuesday, Tun Dr Mahathir said the government had not decided yet on the project and that negotiations were ongoing. Earlier that day, he said Malaysia would be "impoverished" if the government proceeds with the project.

He told reporters that the compensation for cancelling the ECRL would be significantly lower than the debt the government would have to pay for the next 30 years if it was continued.

Meanwhile, industry sources told The Star that the CCCC is still holding out for an amicable solution amid uncertainty surrounding the project's future.