JAKARTA (THE JAKARTA POST/ASIA NEWS NETWORK) - Indonesia's presidential election is just around the corner and many Indonesians have been eager to show support for their favourite candidates.

While wearing T-shirts displaying candidate photos is common, creative entrepreneurs have come up with other interesting alternatives, from air fresheners to die-cast cars.

Who would have thought that President Joko "Jokowi" Widodo and Prabowo Subianto could be so fragrant?

Jakarta-based D&A Airfresh has transformed the presidential candidate pairs into hanging air fresheners either for your car or home. Lasting for two to three weeks, the air fresheners come in five different scents, like "milky vanilla" and "ocean breeze".

D&A Airfresh has made the candidate air fresheners since the brand was launched in October 2018. "We were just iseng (doing something for fun) and we wanted to take part in the election as there has been a lot of people selling their souvenirs," the company's representative Andre, who like many Indonesians go by one name, told The Jakarta Post on Feb 22 during a phone interview.

Mr Andre said their products are available from online marketplaces, including Tokopedia and Bukalapak, and Instagram, but they have not yet offered the air freshener to the two campaign teams. 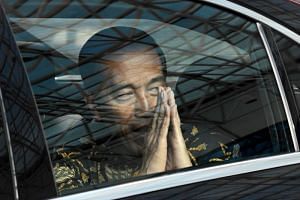 Indonesia votes: Who are running for president and vice-president?

"We're still looking for connections (to them)," he said, adding that his buyers were mostly young people.

Mr Andre said that the different sets of air fresheners are equally popular among his customers.

Based in Tangerang, the online Big Apple Store has gained success selling die-cast Tomica Toyota Voxy cars with images of the Jokowi-Ma'ruf and Prabowo-Sandiaga tickets incorporated into their design.

The 1:65-scale model, available for purchase from e-commerce websites like Tokopedia and Shopee, is painted white at the base, and emblazoned with the Indonesian red and white flag and images of the presidential candidates. Prices start at 170,000 rupiah (S$16.15).

Ms Maulia aka Lia, one of the Big Apple Store owners, told The Jakarta Post that they initially launched the die-cast model last year. Ms Lia's husband, Mr Budi, has been a long-time fan of die-cast and he was inspired to make a presidential election edition.

"It's actually trial-and-error - we're not endorsing any of the candidates," Ms Lia told the Post. "But we tried to sell it and many people liked our products up until now."

Said to be an original Tomica, Mr Budi modified the car and its box before offering it to his friends through several WhatsApp groups. They were enthusiastic about it. One of his friends, who was apparently a part of a regional campaign team, ordered 10 cars.

At first, the company spent two weeks modifying each model, but now they only need about one week.

They said the majority of their customers in Jakarta and its surroundings order die-casts with Mr Prabowo and Mr Sandiaga, while die-casts with Mr Jokowi and Mr Ma'aruf are more favoured in regions like Central and East Java.

For now, the couple does not have any plans to focus on more politicians in Indonesia. "But several people have requested us to make replicas of their company cars," said Ms Lia.

Those interested in their products better hurry. Reportedly, the Jokowi-Ma'aruf edition has already sold out.

Local fashion brand Cottonink launched its COTTONINK x Hari Merdeka collection in February for which they collaborated with comic artist Hari Prast. The collection comprises a series of illustrated unisex T-shirts that encourage people to vote and maintain peace during the election.

One of its T-shirt designs depict a group hug involving Mr Joko, Mr Prabowo and pencak silat athlete Hanifan Yudani Kusuma. This rare moment happened during the Asian Games in Jakarta in August.

"Our purpose is to motivate young voters, who play an important role in determining Indonesia's future for five years ahead, to participate in the 2019 elections and not turn it into a war zone. The point is: Vote, don't fight," said Cottonink's brand and marketing director Ria Sarwono on the brand's website.