Malaysian millennials like Shephanie Kuan are discovering that a university degree alone is not sufficient to land them a job. Experience, prospective employers have been telling her, matters as well.

Ms Kuan, a 24-year-old linguistics graduate from Penang, has found herself in a Catch-22 situation since graduating last August.

"Yes, I don't have enough experience but I can make it if the companies give me a chance," said Ms Kuan, who studied in a local college.

Malaysian youth want to be given a chance, but the job market is lean. The country's central bank - Bank Negara Malaysia (BNM) - said between 2010 and 2017, the number of tertiary graduates entering the workforce surpassed the number of jobs created for them.

In its annual report published in March, it said that on average, 173,457 diploma and degree graduates entered the workforce annually over that period.

But only 98,514 high-skilled jobs were created over that time.

"This suggests that the economy has not created sufficient high-skilled jobs to absorb the number of graduates entering the labour force," BNM said in its report.

Employers complain about the quality of fresh graduates and their unrealistic salary demands. Two-thirds of employers in a survey said that graduates asked for unrealistic wages of between RM2,400 and RM3,000 a month.

"The high unemployment rate among youth is partly due to the lack of job experience and insufficient skills or education to compete in the labour market," the Finance Ministry said in its annual economic report published last November.

The ministry noted that most of the jobs created in 2018 were in the unskilled and low-skilled category.

The persistent high youth unemployment rate is giving Malaysia's one-year-old government another headache as it grapples with legacy issues left by the previous administration, while at the same time tackling a slowing global economy and the worsening United States-China trade war.

The Pakatan Harapan (PH) coalition took over from Barisan Nasional with the help of widespread support from young people, but the government of Tun Dr Mahathir Mohamad is now facing declining support from this group.

Market research company Kajidata reported that overall confidence in PH among those in their 20s slid by 16.4 points by the end of last year, just months after the May election.

Young people who do find work are hit by another whammy.

"After adjusting for inflation, real starting monthly salaries for most fresh graduates have declined since 2010," BNM said. 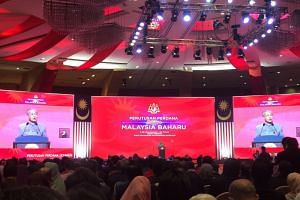 To start with, many graduates are just hoping for a job interview.

"Employers care more about what they see in the resume than face-to-face interaction," said 23-year-old accounting diploma holder Lydia Wester.

"I get told that employers prefer degree holders. It's either that or they want someone with at least two years' work experience."

Employers, meanwhile, complain about the quality of fresh graduates and their unrealistic salary demands. Two-thirds of employers who took part in a 2017 JobStreet survey said graduates had asked for unrealistic wages of between RM2,400 and RM3,000 a month.

But a Khazanah Research Institute (KRI) report published last December found that fresh graduates were not choosy about jobs and did not ask for high salaries.

The report noted that when compared against the government-mandated monthly minimum wage of RM1,100 - meant to aid the working poor and low-skilled - what young people with tertiary education are asking for "does not seem unrealistic".

"Results suggest that young women and men cannot be considered choosy when most in unskilled and low-skilled jobs are 'over-educated' and their current jobs are not related to their level or field of education," the institute said.

Ms Kuan, who has been job-hunting for the past two months after a six-month internship ended in February, said: "There's a lot of stereotyping by employers who are looking to hire from a certain ethnic group only and generalising that overseas graduates are better than local graduates."

Some young people have turned to the gig economy. The Employees Provident Fund found that in 2017, the gig economy grew by 31 per cent over the year, faster than the traditional job market.

In its report, the KRI noted that one-third of young workers are turning to non-standard employment, including freelancing, which it said offers limited access to labour and social protection.

But it pays the bills, said Ms Chow Qian. After graduating with a music degree, the 22-year-old from Sabah has been working as a part-time music teacher during the day and performing in a band at night.

"A full-time job gives you a stable income but freelancing gives me the freedom to do what I want. I'm luckier compared with my classmates who are just starting out and don't know anyone in the industry," she said.

A version of this article appeared in the print edition of The Straits Times on May 28, 2019, with the headline 'Fresh grads in Malaysia struggling to find jobs'. Subscribe
Topics:
More
Whatsapp Linkedin FB Messenger Telegram Reddit WeChat Pinterest Print Purchase Article Copy permalink