In its editorial, the paper says that sincere talks between the two countries are the best way to avoid a trade war damaging for both sides.

Yet, with the surplus in China's favour proving an itch that US President Donald Trump cannot stop scratching in his bid to achieve what he calls "fair and reciprocal" trade relationships - in real speak meaning they conform to his "America first" mantra for the voters - trade tensions between the world's two largest economies have been on the rise.

Given the increasing protectionist measures Washington has been taking since Trump took office, there has, not surprisingly, been talk of tit-for-tat actions leading to a possible trade war.

To avoid that worst-case scenario, the two sides should take the opportunity of this week's visit to Washington by China's top economic adviser, to focus on common ground and find reasonable solutions to their trade differences.

The talks between Liu He, who is also a member of the Political Bureau of the Chinese Communist Party's Central Committee, and Trump's trade envoy Robert Lighthizer will likely serve as a harbinger of how Sino-US trade relations are going to evolve in the near future.

Liu's visit, which began on Tuesday (Feb 27), highlights once again that Beijing is seeking to work with Washington to tackle the trade differences between them head-on, and there is certainly much room for the two sides to cooperate to achieve more balanced trade if they demonstrate the necessary shared willingness. 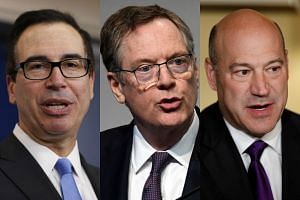 Senior US, Chinese officials to meet this week on trade: White House

After all, China is the major buyer of US farm products such as wheat and soybeans, as well as Boeing planes, and during Trump's visit to Beijing in November, he sealed deals worth US$250 billion (S$331 billion) with China.

Since then, his administration has defined the bilateral relationship as one of rivalry and competition.

However, the opportunities for cooperation and the benefits that can be accrued from them should not be ignored or missed.

Frank and sincere talks with a willingness to agree on quid pro quo actions to achieve a mutually satisfactory solution are the best, if not the only way, to avoid escalating retaliatory measures that would lead to a trade war damaging for both.