Their nomination forms were accepted by the returning officer yesterday.

There is a 14-day campaign period before the Jan 26 vote.

PH candidate Manogaran suffered a narrow 567-vote defeat in the May general election, which was won by a BN candidate. But the result was annulled in November after an election court ruled that BN had won due to bribery.

The Cameron Highlands ward has the highest percentage of Orang Asli among the 222 Malaysian parliamentary wards. 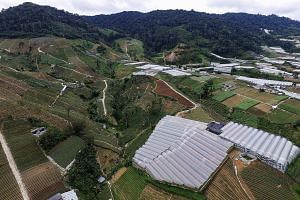 The Pahang ward also produces a big chunk of the country's vegetables, flowers and fruit, with some of the output exported to countries such as Singapore.

Analysts expect a tough fight for PH, eight months after it won federal power and as it struggles to deliver on election promises.

PH is also facing headwinds that are set to slow the economy over the next two years, and growing anxiety among the Malay-Muslim majority over the erosion of special privileges they have enjoyed for decades. The Cameron Highlands by-election is the fifth since Tun Dr Mahathir Mohamad took power - with three for state assembly seats in Selangor won handsomely by PH. The fourth was the forced parliamentary vote in Port Dickson to allow PH leader Anwar Ibrahim to return to Parliament.