KUALA LUMPUR (THE STAR/ASIA NEWS NETWORK) - The four people who were arrested in June in relation to the abduction of Malaysian pastor Raymond Koh have been released, a public inquiry was told.

"There was no proof to charge them with the abduction. There was no further action against them," he told a Suhakam inquiry on Thursday (Nov 2) looking into the disappearances of Pastor Koh, social activist Amri Che Mat, Pastor Joshua Hilmi and his wife Ruth Sitepu.

The inquiry is being held under Section 12(1) of the Human Rights Commission of Malaysia Act.

In June, then Inspector-General of Police Tan Sri Khalid Abu Bakar said police found compelling evidence that pointed to Pastor Koh's kidnapping following a shootout with a drug and arms smuggler in Kedah.

Four people were arrested following the shootout and they were brought to Kuala Lumpur where they were remanded.

ASP Supari said the suspects were put in an identity parade, but it turned out negative.

He said Pastor Koh's family were not cooperative in the investigations, especially when asked questions related to the alleged proselytisation of Muslims by the pastor.

"His children and wife just said they don't know. His wife screamed at me and asked why I was harping on the conversion aspect.

"To me, it's not fair because it's a challenge to look for him," he said. 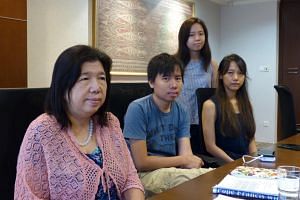 As an investigator, he said he would not be satisfied until he knew what happened to Pastor Koh.

Pastor Koh's family and friends had earlier cut a cake during a session break to "celebrate" Pastor Koh's 63rd birthday yesterday. Susanna Liew said she hoped that her husband would be found soon.

"We are sad he's not here but we are hopeful he will be released soon. We pray he will be treated well and is in good health and strength," she said tearfully.

Pastor Koh was abducted from his car by a group of men in Petaling Jaya on Feb 13 at about 11am while on his way to a friend's house.

Pastor Koh's silver-coloured car bearing the number plate ST5515D has not been found.