In a Facebook post, he responded to remarks made by Finance Minister Lim Guan Eng earlier in the day that about RM3.1 billion (S$1.05 billion) of government funds were misappropriated from TRX City to pay off the state fund's debts.

The former premier said that the take-over of TRX City by Minister of Finance Incorporated (MOF Inc) for a nominal sum of RM1 effective March 31, 2017, was a key step in the broader 1MDB rationalisation plan.

Najib said that after taking over the two prime assets, MOF Inc then assumed payment of certain 1MDB liabilities from April 1, 2017, in return for the asset transfer.

"YB Lim himself admits that even with a further 'up to' RM2.8 billion injection by MOF Inc, the TRX project will be worth at least RM7.8 billion and show a profit.

"Surely it cannot be called a bail-out if the money is to be used to generate a profit?" Najib said in the Facebook post.

"If properly planned, marketed and developed, the Bandar Malaysia land alone could be worth RM30 billion," he said.

Najib said that no monies from TRX City were misappropriated by 1MDB and as practised by many companies, approximately RM3 billion of inter-company loans were made over time by TRX City to 1MDB. 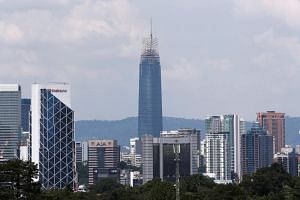 He said that all these inter-company loans were repaid by 1MDB effective March 31, 2017, through a combination of cash repayments and a set-off against dividends paid by TRX City to 1MDB.

"These repayments were carried out with the approval of MOF Inc and were properly reviewed and signed off by the auditors of TRXC in the March 31, 2017, financial statements.

He said Lim should not be making factually incorrect statements as part of Pakatan Harapan's "political vengeance" against him and the previous Barisan Nasional government.

"Not only is it unprofessional, it spooks investors in the currency, bond and stock markets. Surely the well being of our economy is much more important than the issuance of politically-motivated statements?" said Najib.

TRX City said on Thursday it will lodge a police report on allegations that funds meant for the TRX development were instead used to repay 1MDB loans.