KUALA LUMPUR - Former Miss Malaysia Pauline Chai has claimed that the divorce petition filed against her in Malaysia by tycoon Khoo Kay Peng is now "academic", as an English court has declared them as being officially divorced, The Star reported.

In a message to The Star through her counsel New Sin Yew, Ms Chai, 70, said: "I'm so relieved that I have a resolution to this long, four-year process. I look forward to moving on to the next chapter in life with my family."

Mr New contended that with the British court ruling, the divorce proceedings in Malaysia could be considered "redundant".

"It is academic. The marriage has ended. The English court declared on Thursday that they are officially divorced. The decree absolute has been granted to her there. In UK, the lawyers are waiting for the split of assets," he said.

The decree absolute is the legal document that ends the marriage.

Britain's Mail Online had reported on Thursday that a family judge had signalled the end of the marriage by granting a decree nisi with both sides having racked up £6 million (S$10.7 million) in legal fees between them - one of the most expensive divorce cases to come before the British courts. 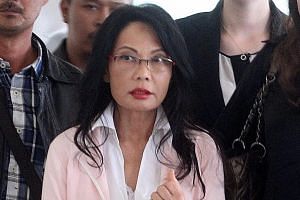 Ms Chai had wanted the divorce to be decided in the United Kingdom, where she stood to receive 50 per cent of the assets of Tan Sri Khoo. The latter tried to have the case heard in Malaysia, where Ms Chai, the Miss Malaysia 1969 winner, would likely have been awarded much less.

The amount that Ms Chai is asking for as a payout will be agreed later in the year.

She had asked for £85,000 a month from her estranged husband, who lives in Malaysia. There is also a payment of £135,000 a year that she wanted to cover first-class flights, suites at five-star hotels and chauffeurs, the Mail Online reported.

"The English decree absolute is not automatically recognised in Malaysia. The Malaysian courts still retain jurisdiction to hear the Malaysian divorce petition which is pending," she said.

On April 28, 2016, a Federal Court denied Ms Chai leave to appeal against a Court of Appeal ruling that she did not have the right to choose her domicile of choice as common law stated that a wife's domicile must follow that of her husband.

This resulted in Mr Khoo, 77, proceeding with his divorce petition against her in Malaysia.

The tycoon wanted his divorce proceedings heard in Kuala Lumpur instead of in England.

Ms Chai wanted a British court to decide on the divorce proceedings, claiming she had not been living in Malaysia since 1980 and is a resident of Britain.

Ms Chai and Mr Khoo, who married in 1970, have five children. She filed the divorce proceedings in England on Feb 14, 2013, seeking half of Mr Khoo's wealth as settlement.

Ms Chai filed the divorce petition on grounds of unreasonable behaviour against Malaysia's 44th wealthiest man, according to the Forbes 2015 list of Malaysia's 50 richest persons.