The Swiss posted a photograph of himself with Tun Mahathir on Facebook and expressed his awe at meeting the Prime Minister.

"What a great privilege and what an incredible moment!" he wrote.

Mr Justo is a key figure in the 1Malaysia Development Berhad (1MDB) case and was believed to have shared information on 1MDB with Sarawak Report editor Clare Rewcastle-Brown.

Ms Rewcastle-Brown, who was barred from entering Sarawak in 2013 due to her reports on state fund 1MDB, is now back in Kuala Lumpur following the change in federal government.

An arrest warrant against her issued in 2015 has been rescinded by the new government.

The Swiss Attorney General's office said on May 1 that it had launched investigations into two officials from PetroSaudi - which ran an energy joint venture with 1MDB from 2009 to 2012.

Mr Justo told Reuters earlier this month that he was trying to clear his name after being jailed in Thailand for blackmailing his former employer over its ties to scandal-hit 1MDB.

It was documents that Mr Justo leaked after he left PetroSaudi in 2011 that triggered the international investigations. 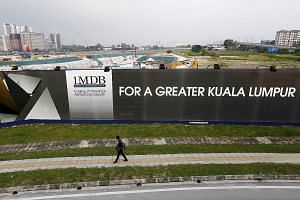 1MDB: The fund that may have led to a Malaysia government's fall

In Malaysia, the new Mahathir Mohamad administration is moving swiftly in its 1MDB probe after taking power in the May 9 general election.

Former prime minister Najib Razak, who oversaw 1MDB as finance minister, has been summoned to meet anti-graft officials on Tuesday (May 22).

He has consistently denied any wrongdoing in the fund, which was set up in 2009 soon after he became prime minister to spur national development projects.

Authorities in the US have said some US$4.5 billion (S$6 billion) was misappropriated by high-level officials running the fund.