Datuk Shahrol Azral Ibrahim Halmi, who has been named by investigators as the main person responsible for financial mismanagement of state investment fund 1Malaysia Development Berhad (1MDB), served as the founding managing director and chief executive officer of the firm for five years.

In findings handed down yesterday, the bipartisan Public Accounts Committee (PAC) said that Mr Shahrol oversaw a number of questionable transactions between March 2009 and March 2013, during which 1MDB's debt ballooned.

The PAC found that in many instances, Mr Shahrol, as part of the management team, had defied specific orders from 1MDB's board of directors and taken actions contrary to the board's instructions.

In a statement yesterday, Mr Shahrol insisted there had been no wrongdoing or illegal activity conducted in 1MDB under his watch.

I note that the PAC's report shows that RM42 billion (S$14.5 billion) is not missing from 1MDB, as had been alleged by Tun Mahathir. However, the report has identified weaknesses in 1MDB's capital structure and management. We will study and act on the report's recommendations... Equally, it is now clear that Tun Mahathir's allegations against 1MDB have been false. He was motivated by personal interest, not the national interest, and a desire to unseat the government. '' 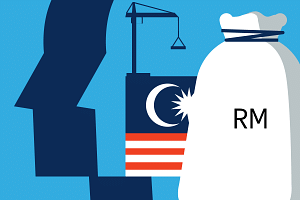 He appeared before the PAC three times, twice in November last year and once in February this year.

In 2013, he joined the Performance Management and Delivery Unit (Pemandu) under the Prime Minister's Department as director of the oil, gas and energy, and financial services' national key economic areas.

He remains a 1MDB director.

He is also president and chief executive officer of Malaysia Petroleum Resources Corporation.

According to the 1MDB website, Mr Shahrol has more than 13 years of experience in IT transformation and integration.

The Stanford University graduate has led projects in Malaysia, including a multi-year programme at the Employees Provident Fund and the handling of the merger of Sime Darby, Guthrie and Golden Hope to form Synergy Drive.