ISKANDAR PUTERI (THE STAR/ASIA NEWS NETWORK) - The multi-billion-ringgit Forest City project being built in Gelang Patah has contributed to not only Johor's economy but also the country's, says Menteri Besar Osman Sapian.

He said the project by Country Garden Pacificview (CGPV) had so far contributed RM630 million (S$209 million) to the state coffers in taxes, dividend payouts and land premiums.

The federal government had also benefited from the project, with RM309 million paid by the company for corporate taxes, levy and fees, Datuk Osman explained.

"There were inaccurate news reports by the local media in recent days, resulting in confusion about the project," Mr Osman said at his office at Bangunan Dato' Jaafar Muhammad in Kota Iskandar.

Mr Osman said CGPV had invested RM11.5 billion in the project as at July this year.

It has also awarded about RM1.4 billion worth of jobs to 150 local contractors.

He said the company had hired 1,545 employees for the project, of which 1,200 were locals, adding they had paid personal income tax amounting to RM51 million to the Inland Revenue Board. 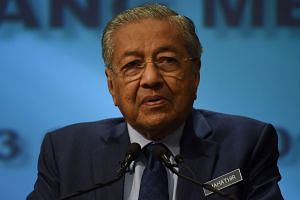 Foreigners can buy Forest City units, but will not be issued residential visas: Mahathir

"Of the 700,000 residents of Forest City, the number comprises not only buyers from China but also locals as well as tourists, professionals and students when the project is completed, expected to be 25 years down the road," said Mr Osman.

He dismissed claims that Chinese citizens who buy a house in China built by Country Garden Holdings would get a free house in Forest City.

He said the company had invested RM730 million for its industrial building system (IBS) plant on a 7.28ha site in Gelang Patah near here.

The plant is able to produce about 260 cubic m of building construction materials each year.

"This is the biggest IBS plant in the region and the state government will talk to the company to produce building materials for Johor's affordable houses," said Mr Osman, adding that using IBS could reduce the building costs.