PUTRAJAYA (THE STAR/ASIA NEWS NETWORK) - Foreigners can only be hired as cooks in restaurants and eateries and not as frontline staff, says the Immigration Department.

Its director-general Datuk Seri Mustafar Ali said the policy of not allowing foreign workers to be employed as frontliners remains for now.

"Until and unless policymakers decide otherwise, we will not allow the front part of restaurants and coffee shops be manned by foreigners," he said in response to an article by The Star on eateries being forced to shut down due to a shortage of workers.

According to a joint committee representing the owners, some 2,000 Chinese coffee shops and 400 Indian-Muslim and banana leaf restaurants ceased operations last year and the situation could worsen as thousands of foreign workers who went back to their home country during the Chinese New Year festive break had not returned.

Mustafar said despite the immigration regulation being clear on this policy, checks conducted by the department shows otherwise, with many outlets hiring workers as cashiers, salespersons, waiters and waitresses.

"This is very unfortunate because it shows that employers disregard the law. Their actions contribute to the influx of illegal foreign workers as there is high demand for them," he said. 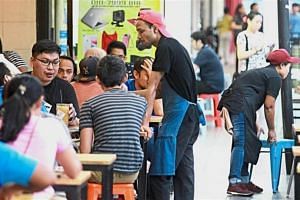 There are now 71,515 foreign workers legally employed in the restaurant sub­sector. According to Immigration records, the department conducted 3,844 enforcement raids since January, of which 47,129 foreigners were examined.

These operations also resulted in 10,378 foreigners being held for various Immigration offences.

"We also conducted checks on 558 restaurants and checked 3,682 foreign workers. From here, we detained 1,162 people and 40 employers," said Mustafar.

He said restaurant owners and food operators requiring to hire cooks among foreign workers could go through the re-hiring programme without having to bring in new workers to help resolve the influx of illegal immigrants.

"I would like to stress again that this is only applicable for cooks," said Mustafar.

"I hope this is clear because we will take action against those who engage the services of foreign workers to man restaurants."