MANILA (AFP) - A fly that interrupted his speech was working under the orders of priests, Philippine President Rodrigo Duterte joked on Tuesday (July 30), as he launched a new verbal attack on the country's influential Catholic church.

The fly buzzed around Duterte as he spoke at a school in Manila, landing on his forehead and cheek and causing him to flap his arms in a futile bid to swat away the pesky insect.

"I've had a fight with priests for a long time," the 74-year-old strongman said without missing a beat.

"This fly is taking orders from them. It has been following me for some time," he added, drawing laughter from the audience.

Duterte later cursed the fly when he missed flicking it with a finger as it landed on a microphone.

"Wait until I'm done with my speech. I will smash you with the manuscript," he said.

Earlier, Duterte said the Catholic church's dogma was "simply not acceptable to my God-given common sense".

"I have a God. I just don't want to be saddled with religions," he said.

The Philippine president has a history of criticising the Catholic church, which counts some 80 percent of the nation's more than 100 million people as believers.

WATCH: President Rodrigo Duterte asks for a bottled water after a fly landed on his glass. @inquirerdotnet pic.twitter.com/zbM4vioZwk

Last year he angered church leaders by taking aim at the biblical version of man's creation, saying: "Who is this stupid God?".

Church leaders have been critical of his policies, including an anti-narcotics crackdown that has left thousands dead. 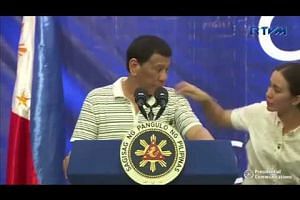 They also oppose his calls for bringing back capital punishment.

Tuesday's fly incident was not the first time an insect has ruined one of his public engagements.

In May, a cockroach crawled up his shoulder and down the front of his shirt as he spoke at a campaign rally ahead of congressional elections.

Duterte later joked that the bug belonged to the opposition.