He said that although the number of evacuees currently at relief centres in Kedah and Perlis was rising, flood waters in both states were already receding.

"The number of victims has been increasing due to the flow of flood water from upstream, passing through low-lying areas before flowing out to the sea," he told a press conference after his visit to the SK Titi Gajah relief centre, adding that some evacuees were those affected by the floods while others were evacuated as a precautionary measure.

Azmy added that weather conditions over the past two days had improved. 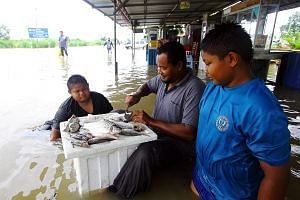 "Some of the evacuation centres in both states have been closed. However, they will be made operational if the need arises.

"Our men are on standby around the clock and currently we have 400 men in Kedah and 300 in Perlis, with thousands more volunteers on standby," he said.